Watch Tom Watson play golf and you can see it as plain as day. The same energetic address, waggle and the rhythmic tempo that well might have slowed marginally with age, but is repeated with marvellous efficiency.

His concentration is steely as his decides on both club and shot but once the decision is made, the trigger is pulled without hesitation. 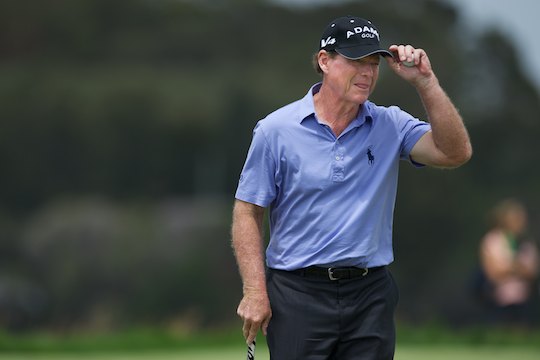 Watson long ago settled on exactly what he wanted to get the most from his talents and it’s a process the former Stanford Psych major has repeated time and again in a career spanning more than four decades at the very top, yielding eight major championships and a still growing legacy as he approaches his 65th birthday.

Adding to the list of what he wants is the return of the Ryder Cup to American hands this September in Scotland after the PGA of America entrusted Watson, the last U.S. captain to win on European soil way back in 1993, with what will be a difficult ‘away’ fixture against a strong opposition.

The U.S. have won the Cup on just two occasions since ’93 but speaking down the line from Kansas as most of his ‘possible and probables’ were engaged in the first round of the Bridgestone Invitational, was a man with a clarity of purpose and direction.

“The PGA said ‘you can have as many (captain’s) picks as you want’ but I felt that four was too many,” Watson said. “I made the decision to reduce the number of picks from four to three this year, based on the feeling that the more players that could make it on the team automatically, the better.”

Following his announcement as skipper, Watson quickly stamped his authority by surrounding himself with assistants of his own ilk in Raymond Floyd and Andy North, a leadership group long on experience but also largely removed from the current generation of players.

Watson’s view on Tiger Woods’ participation at Gleneagles remains the same as when asked countless times over the past month – “I want him on the team if he’s healthy and playing well” – but his views on what he wants from the candidates vying for the all-important picks were surprisingly straightforward.

Interestingly, they didn’t revolve specifically or exclusively around some of the factors you might expect and that I put to him i.e. recent form, tournament winners, past Ryder Cup experience, all of the above.

“I’m looking for someone who can make that five-foot putt when they have to,” Watson said, noting the European team outplayed and outputted the Americans to be 25-under par against 8-under in the Sunday Singles to retain the Cup at Medinah in 2012.

“Can they do it under pressure, get the job done under pressure? That’s what I’ve been looking very hard at for the past year. Players with the guts and the heart are the most important factors for me.”

When you look at the U.S. qualification list entering the Bridgestone, players like Woods, Steve Stricker, Bill Haas and Hunter Mahan were well outside the auto qualifying spots but might take some take some solace from the fact that Watson will not be afraid to go ‘deep’ to players who meet his criteria.

“When I was Ryder Cup captain the last time (1993), I went down the list and picked Lanny Wadkins and Raymond Floyd. They were pretty far down the list but both players, especially Ray Floyd, backed up my decision as they helped the team.”

Whatever Tom wants, it’s clear, he will get.