Ryo Ishikawa back in winner’s circle in Japan

Former PGA Tour player Ryo Ishikawa ended a three-year title drought when he rolled in a birdie putt at the second playoff hole and beat Rikuya Hoshino to win the Mitsui Sumitomo Visa Taiheiyo Masters on the Japan Tour for the third time on Sunday.

Ishikawa, once one of golf’s brightest young talents, picked up his first win in three years and earned ¥40 million (A$426,000) for his third Taiheiyo Masters win and 18th career victory on the Japan Tour. 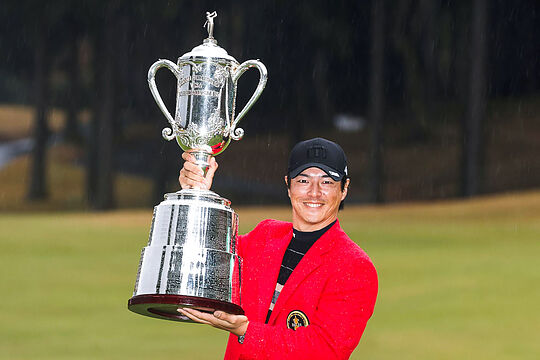 The pair had finished regulation play at 8-under-par to force the playoff.

“It’s unbelievable,” said Ishikawa. “It still hasn’t sunk in. I’m 31 now and so glad to win this wonderful tournament. I wanted to produce a result so badly. I’ll continue to aim higher.”

In 2007 Ishikawa became the youngest winner ever of a men’s regular tournament on the Japan Golf Tour by winning the Munsingwear Open KSB Cup at the age 15 years and 8 months. He turned professional in 2008 and won another Japan Golf Tour tournament, the Mynavi ABC Championship. By the close of 2008 he had become the youngest ever player to reach the top-100 of the Official World Golf Rankings and was poised for greatness.

Much of Ishikawa’s success, however, would only be limited to Japan where he has won 18 of this 19 professional titles. His best result in a major was a tied for 29th at the 2013 PGA Championship.

Ishikawa played on the PGA Tour in 2013. He made 13 cuts in 23 events, finishing 149th on the money list and missing the FedExCup playoffs having finished 141st. He played the Web.com Tour Finals and finished 13th to retain his PGA Tour card for 2014.

Ishikawa recorded nine top-25s and made 14 cuts during the 2014 PGA season, including a second-place finish at the Shriners Hospitals for Children Open and a tied 5th at the unofficial ISPS Handa World Cup of Golf. In recent years he’s primarily played on the Japan Tour having spent four years in the US.

Next up on the Japan Tour schedule is the venerableDunlop Phoenix, which counts the likes of Tiger Woods, Seve Ballesteros, Tom Watson and Ernis Els amongst its winners.