Rory Sabbatini and Kevin Tway won the QBE Shootout at Tiburon Golf Club, birdieing the final two holes in best-ball play for a 12-under final round 60 and a two-stroke victory.

Part of a five-way tie for the second-round lead, Sabbatini and Tway finished at 31-under in the three-day event with Jason Kokrak and J.T. Poston were second after a 62. Sabbatini and Tway managed an eagle, 11 birdies and a bogey during their final round to make the breakaway. 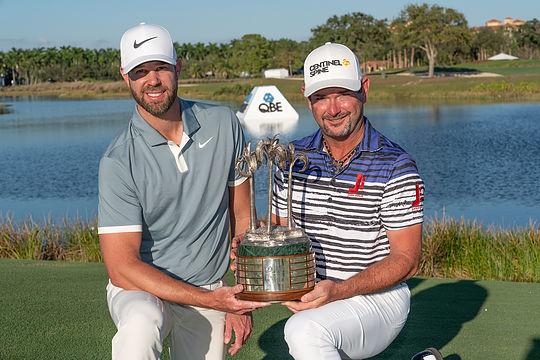 “That’s the big thing is you’re right there,” said Bob Tway. “It doesn’t get any better than that. When you’re outside the ropes, you’re just watching. This was a lot of fun.” “Rory played unbelievable today.”

Kokrak and Poston, both tournament rookies, looked like they were going to grab the win, building a four-stroke lead after eight holes. But they bogeyed the 9th and parred the next three holes to create the opportunity to be overtaken which Sabbatini and Tway jumped on.

Harold Varner III and Ryan Palmer (63), and Brendon Todd and Billy Horschel (63), were tied for third at 28-under. Ian Poulter and Graeme McDowell fired a nine-under 63 in the third and final round to end up outright fifth.

The QBE Shootout is a team golf event that takes place on the PGA Tour as an unofficial money event.