Sally’s timely advice pays off at The Links

Maybe we should all be giving work a break and playing more golf.

At least that’s the advice from Kogarah golfer Sally Kirkright following her win in last month’s two-day Open event at The Links at Shell Cove. 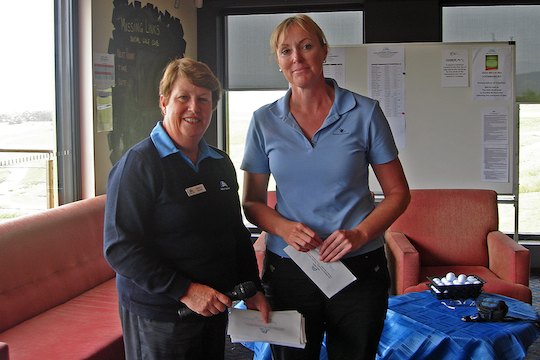 Sally’s timely advice pays off at The Links

Kirkright carried off the Single Stableford trophy for the weekend, set up with a hot score off 44 stableford points from her 32 handicap on the opening day around a difficult layout.

And it was during the presentation afterwards that Kirkright gave her timely “holiday” advice that all players should “give work a break for a while and play more golf.”

Certainly she took her own advice to heart, taking time off from her full-time job to play and enjoying a little more golf.

Kirkright also made special mention of her partners, thanking them for their encouragement and enthusiasm as well as her fellow club members from Kogarah for what turned into a great weekend’s golf.

Kirkright was too strong for Diane Simpson (23 handicap) from Liverpool, who scored 35 points to win second on a countback from Hurstville 27-marker Janet Allam.

The Yowani team of Jane Skiperdene, Bev Flynn, Rhonda Riches and Sharon Griffin produced what they described as a “dream round” with a score of plus 16 to win by three from the Wakehurst team of Ruth Chuter, Joan Cleary, Laura McCaffney and Anne Martin.

The Yowani team were naturally thrilled to win with such an incredible score and stated that they had all played extremely well on the day and had some good luck with a few long putts going when needed most to give them a plus.

For those who haven’t been lucky enough to play there, Yowani Golf Club is situated in Canberra’s northern suburbs of the ACT and is widely regarded as one of our most beautiful and challenging golf courses.

The Links at Shell Cover also deserves plenty of plaudits.

Voted one of the top 50 golf courses in Australia to play for under $50, The Links at Shell Cove Golf Course was beautifully-presented and marvellously lush following recent rains.

Shell Cove’s fairways are kikuyu with the first cut of rough kind to the players, although beyond this the grasses are extremely long and if your shot goes astray it can be quite a challenge to even find your ball.

The greens were true and the speed was average with the exceptions of the 9th and 18th which played as the most difficult on the course – as the score cards showed.

Golf New South Wales sent a vote of thanks to all the staff at The Links for their attention over the two-day tournament.

A Golf NSW spokesman said all were extremely helpful and friendly to both the officials and players alike.

More information and scores can be found on the Golf NSW website at www.golfnsw.org.