Finland’s Kalle Samooja fired a course record 8-under-par 64 to win the European Open on Sunday and finish two shots ahead of Wil Besseling of the Netherlands.

Samooja fired eight birdies, including three in the last four holes, to establish a course record at the Green Eagle Golf course in Hamburg, Germany. The Finn overturned a seven-shot deficit to land his maiden European Tour title and in the process secure a US Open spot.

“We had a number in mind today and we reached that,” said Samooja.

“In the end, fortunately it was enough. We were pretty sure that it was going to be a playoff or we might even miss the playoff. I was just hoping to get a solo second and get a ticket to the US Open but this is a little better.”

Samooja didn’t break par in his first three rounds after shooting rounds of 72, 72 and 74. But the 34-year-old played like a man possessed and almost capped it off with an eagle at the 18th.

Samooja’s other professional win was in 2018 on the Challenge Tour where he won the Hainan Open with a two stroke victory over Scotland’s Grant Forrest. 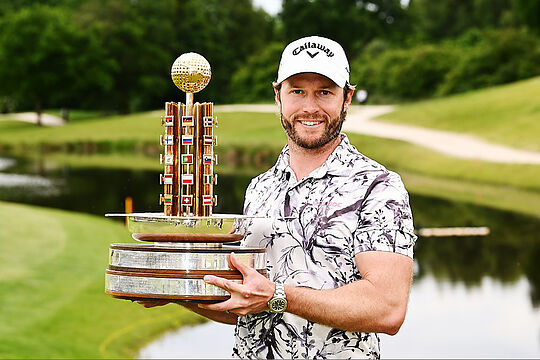 Overnight-leader Victor Perez who was seeking back-to-back victories after winning the Dutch Open last week birdied the 10th and 11th to move into a share of the lead, only to bogey three of the next four holes and finish in a share of 3rd position, with Besseling in outright second place at 4-under-par and two behind Samooja.

Jason Scrivener finished the best of the Australians in a share of 25th position, with Maverick Antcliff and Zach Murray missing the weekend.