It took 36 epic holes, but when the moment presented itself, Matias Sanchez grabbed his spot in history with two incredibly calm hands.

Sanchez, 18, played inspired golf in one of the greatest finals in living memory to beat current US Junior Amateur champion Min Woo Lee 1-up at the Australian Amateur Championship. 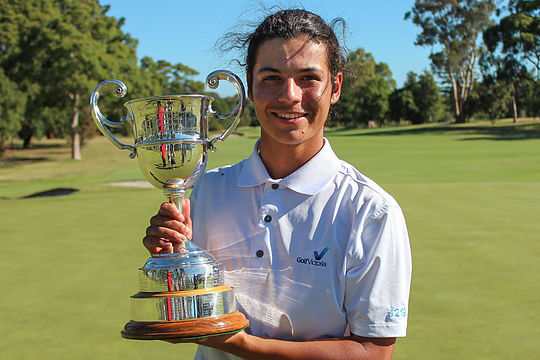 The Royal Melbourne member peeled off 11 birdies in the 36-hole final that will long be remembered for its incredible shot-making by both players on a Yarra Yarra course set up to challenge.

Remarkably, 16 holes were either won by, or halved in, birdies throughout a match of incredible ebbs and flows, none more so than the final three holes each won by Sanchez after Lee looked home at 2-up on the 34th tee.

“I knew I had do something special because Min was playing some great golf and had a lot of momentum there on the 16th and for that shot to drop, it just gave me a huge lift.”

“From there, I just got on a roll, I think. My drive up the last got lucky, but when I had that last putt to win (2m up the hill), I could see the line and hit a good putt and then the feeling was just amazing.”

When Sanchez refers to “that shot” on the 16th, he’ll sleep with a smile for months recalling the putter he hit from 10m behind the green, bumping it up the hill to a tough pin position and watching it fall for birdie on its last roll.

With Lee sitting 2.5 metres away for a potential par, it was a huge momentum swing at the critical time.

A wayward tee shot up the 17th cost Lee a bogey, then the pair’s fortunes took separate paths again off the 18th tee.

Sanchez’s drive hit the wall of the left bunker, but somehow popped up and forward to allow him a shot from rough that he managed to advance to the jaws of the green.

Lee, however, watched in disbelief as his drive ran into a bunker 290m up on the right, then his approach landed hard on the back of the green and scurried up the hill to a position from which bogey was his ultimate penalty.

Sanchez calmly chipped to two metres to put pressure on his good Perth mate, then rolled in the title clinching putt to the roars of the hordes of Royal Melbourne fans who had come to watch.

“I’ll never forget that moment,” Sanchez said. “I had to focus on the putt and not what it would mean and I managed to do it really well and when I hit it I knew it was good.”

Lee, also 18, was typically gracious in defeat and could hold his head high for entertaining the huge gallery with some audacious golf.

“Hats off to Matias, he played some great golf, especially in those last few holes,” Lee said. “You never like to lose, but he played some incredible golf today.”

Sanchez dug deep when it mattered most and history will record him as a more than worthy champion.

Unofficially, he took 11 birdies and just six bogeys through his 36-hole ride to glory.

Officially, for now at least, he’s the best amateur player in the land.

“My game is better than it was last year. My teammates have really pushed me and I’m excited to get the chance to come back to the Australian Open and do better this time,” she said.

“It’s a great honour (to win this trophy),” she told the crowd at the presentation.