Schauffele started the day three back of leader Sebastian Munoz at the Greenbrier Classic and went on to drain a 1-metre birdie putt on the final hole on Sunday to edge Robert Streb by a shot to score his first PGA Tour title.

It was a victory well earned as Schauffele birdied two of the last three holes to gain the win as the Californian closed out in style in just his 23rd start on the PGA Tour.

Schauffele fired a 3-under-par 67 to finish at 14-under and to survive a multi-player play-off involving Streb, Jamie Lovemark and Munoz.

“It’s just been an incredible feeling and it’s honestly just a dream come true,” said Schauffele, who moved to No 27 on the FedExCup points list.

“The tournament was so kind to put a giant leaderboard in front of 17 green. I was trying not to look at it. I saw that it was T-1, so yeah, I knew exactly what I was going into on the last hole.” 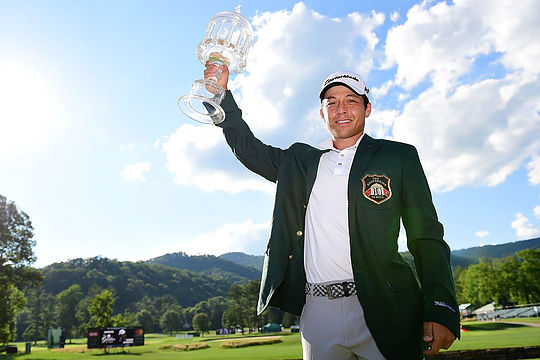 Schauffele is a 2015-16 Web.com Tour graduate who entered the tournament with some forma T5 finish at the recent US Open followed by a T14 at the Travelers Championship.

He moves into the top 100 of the Official World Golf Rankings for the first time and has qualified for The Open at Royal Birkdale in two weeks.

“The US Open was a huge moment in my career,” said Schauffele.

“It was one of the biggest stages, and for me to be calm and collected throughout the week and just kind of hang on and tie for fifth was huge for me mentally. It kind of gave me the confidence and allowed me to play to win this week.”

Although Streb and Munoz did not win, they still finished in the top-4 and qualified for The Open Championship, as did Jamie Lovemark.

At 23-years of age Schauffele is yet another PGA Tour winner this season in their 20′s in a growing trend of young guns winning early on tour. Schauffele also gains a start to this year’s PGA Championship and next year’s Masters. He already had a spot in the 2018 US Open courtesy of last month’s performance.

Curtis Luck finished the best of the Australians in a tie for 20th position at 6-under for his best PGA Tour result. Geoff Ogilvy was in a share of 58th at even par with Matt Jones in a tie of 64th position at 1-over.

As reigning US Amateur champion Luck has been given several invites on the PGA Tour and has missed just two missed cuts in seven starts since turning professional after The Masters.

He is entitled to a further three sponsor’s exemptions for the season and remains a chance to earn automatic exemption to the PGA Tour in 2018 if he can notch two top-5 finishes.

Steven Bowditch missed another cut having only made the weekend once this season at the Career Builder Challenge from his 23 starts on the PGA Tour. Greg Chalmers, Brett Drewitt, Cameron Percy and Stuart Appleby also missed the weekend.