America’s Xander Schauffele showed why he would have been a better Ryder Cup ‘wildcard’ pick than Phil Mickelson in denying countryman Tony Finau to win his first European Tour title and move into fourth place on the Race to Dubai.

Schauffele and Finau ended regulation play locked together at 14 under after 72 holes with Schauffele making short work of the playoff by winning his first WGC title with a birdie at the first extra hole.

“It’s a lot to take in honestly and I didn’t have an incredible Asian Swing up until this point, so I think that flight home will be a little bit more special,” said Schauffele.

“I felt really good about every part of my game mentally, physically. So with a 68, obviously, it was just enough. Tony played well, as well, but it’s tricky to try and fend off when everyone is chasing you.” 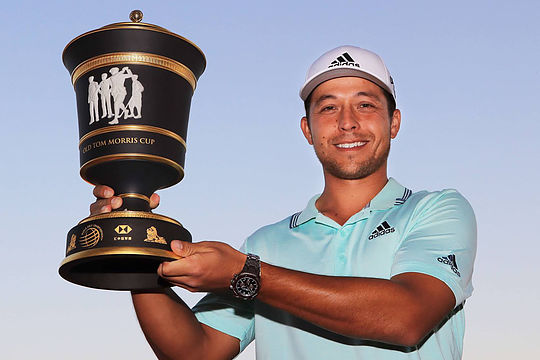 Defending champion Justin Rose was right in it again throughout the day but had to settle for a 72 after a bogey on the last to finish four shots out of the play-off at 10-under.

“Tough day for everybody…you just look at the scoreboard. Seems like everyone fell apart,” said Rose.

“It was a fun battle. I was always just one or two shots behind. I was in the hunt, and a decent defence…solid week.”

Thai Kiradech Aphibarnrat and American Andrew Putnam were then at eight under, a shot clear of another American in Keegan Bradley.

Jason Day topped the Australian attack in 11th place after showing glimpses of form across the week. However, a final round 74 put an end to any chances of last minute run at the leaders. Day finished 10 strokes off the lead at 4-under.

Adam Scott enjoyed another solid week closing in equal 18th place at 1-under.

Rumford’s injury woes continued with back to back rounds of 78 across the weekend adding to his 80 on Friday.

In a pre-round interview, the 41-year-old indicated that he will take three weeks off following the HSBC before playing the Australian Open and Australian PGA and then looking at getting the surgery he requires for his wrist.