Xander Schauffele fired a course-record equalling 11-under-par 62 in the final round to win the Sentry Tournament of Champions in Hawaii on 23 under.

The American started the day five shots behind leader Gary Woodland but could do no wrong on the final day to finish one clear at 23-under-par and secure his fourth PGA Tour title.

Schauffele, who was invited to the exclusive Sentry Tournament of Champions after winning the WGC-HSBC Champions in October 2018, climbed up the leaderboard behind eight birdies and two eagles.

“It was a crazy day,” said Schauffele. “I didn’t do much leaderboard watching. I knew it was going to be a birdie fest at the end. We kept our head down and made a run for it.”

Woodland had a chance to force a playoff after splitting the fairway with his drive on the par-5 18th only to hit a pitch and run to 6 metres and then miss the birdie putt. Woodland began the final round with a three-shot lead and closed with a bogey-free 68.

Rory McIIroy played in the final group with Woodland, three shots behind, a position he was in six times last year without winning. He got within two shots early, but he didn’t make a birdie after a two-putt on the par-5 fifth and closed with a 72 to tie for fourth with Dustin Johnson (67) and Marc Leishman (71).

Brooks Koepka closed with a 69 to finish 24th, which saw Justin Rose return to No. 1 in the world.

Schauffele, who won for the second time this season and first since he beat Tony Finau in a playoff at the World Golf Championships-HSBC Champions last year, has come from behind to win all four of his PGA Tour titles. 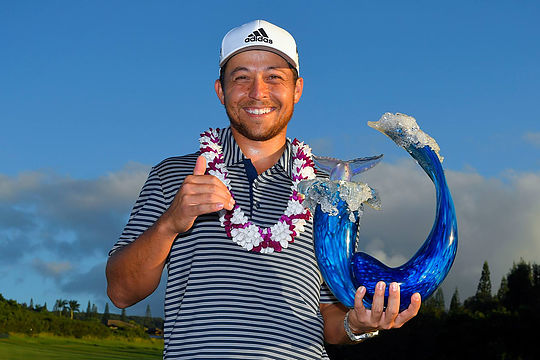 The Californian has also birdied the final hole to either win by one or force a playoff each time. He has a 66.5 scoring average and is 30-under in his last six final rounds, dating back to the 2018 BMW Championship.

Schauffele is also only the fifth player to record a 62 at the Kapalua Plantation course on Maui.