Xander Schauffele had spoken ahead of the Olympic Games of the heartbreak endured by his father, Stefan, in being denied his opportunity, when aged 20, to represent Germany at the sport’s highest level.

His son, Xander, brilliantly made-up for his father’s sadness in capturing the golfing gold medal in Japan. 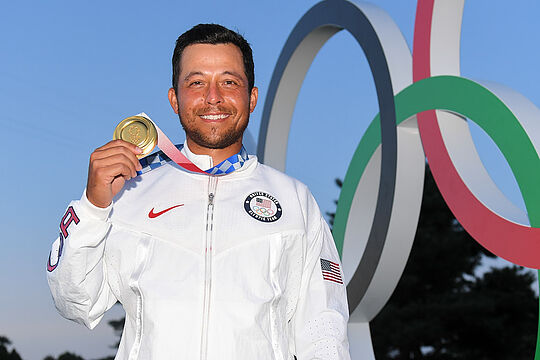 As reported ahead of the Olympic Games, Xander’s German-born father had dreamed of being an Olympian until his car was struck by a drunk driver on his way to decathlon training when residing in Japan.

Stefan turned his attention to his family, including son Xander and became his golf coach. Then in learning Olympic rules stated only only one other person could accompany the golfers to Japan (aside from their caddy), Xander naturally chose his father in returning to Japan.

As he had done for the three days prior, Stefan walked the final round peering through his monocular as his own dreams were fulfilled through his son.

And to see father and son embrace at the final green was pure gold.

“To have my dad here as well is really special,” Schauffele said. “I gave him a hug off the back of the green there. I know this means a lot to him, so I’m just happy to sort of deliver this.”

“And my ties here with my grandparents living here and my mom growing up here as well, there’s just all these things that sort of motivated me to do better, be better.”

“And maybe I put more pressure on myself but it was sort of more than just golf for me and I’m just really, really happy and fortunate to be sitting here.”

“Its just so special. That’s a word that’s thrown around a lot, especially for us golfers, I mean it’s so different for us, we’re used to playing for money and we play a normal schedule and this is every four years and it’s just kind of a different feel to it.”

Schauffele headed into the final round leading by a stroke and got the start he desired with back-to-back birdies at one and two before a third birdie, and the third in four days, at the fifth. Then for all four days, the American birdied the ninth to take a two-shot lead into the closing nine holes.

It would prove an anxious last nine with South African-born, and now Slovakian citizen, Rory Sabbatini establishing an Olympic Games record low of a 10-under par 61 to set the clubhouse lead on 17-under par and Japan’s Hideki Matsuyama edging closer to the front, much to the enormous delight of a small gathering watching the action.

Schauffele then threw the gold medal chase wide open when he bogeyed the par-5 14th however he regrouped, and though tied with Sabbatini with two holes to play, he birdied 17 and then held on to par the last and win by a shot at 18-under par.

It was Taiwan’s C.T. Pan, who came out on top of a seven-way playoff for the bronze medal after firing off a superb final round 8-under 63 to move up 14 places overnight.

Masters champion Hideki Matsuyama joined Rory McIlroy, Collin Morikawa, Sebastian Munoz, Paul Casey and Chile’s Mito Pereira on 15 under alongside Pan with the result being decided at the fourth playoff hole where Pan parred the 18th hole to deny Morikawa.

Australia’s Cameron Smith was unlucky to miss the playoff after bogeying his very last hole to finish at 14-under and one shot shy of a chance at bronze at the Kasumigaseki Country Club.

“I did my best but it just wasn’t good enough. It’s definitely a different week in that there’s only three places you want to be,” Smith said.

“In a regulation PGA Tour event, if I’d walked off the 18th green in fifth or sixth or whatever position I finish in, I’d genuinely be pretty happy.”

“Obviously I’m a bit bummed to end it like that.”

Marc Leishman was unfortunately never in the contest with rounds of 70, 71, 72 and 69 leaving him in a share of 51st place.

The golfing world now returns to some sort of normality with most of the top players in the world heading to Memphis for the $10,500,000 World Golf Championships – FedEx St. Jude Invitational while the rest of the best will be lining up for the Barracuda Championship and the Hero Open in Scotland on the European Tour.