Xander Schauffele has secured his second victory of the year and the sixth of his career holding off J.T. Poston and Sahith Theegala to win the 2022 Travelers Championship.

Schauffele, who entered the day with a one-shot lead over Patrick Cantlay, posted a final-round 68 to finish at 19-under for a two stroke victory over Poston and Theegala adding to his earlier earlier victory this season at the Zurich Classic.

Schauffele opened with a pair of 63′s to hold the early advantage and the 28-year-old was then able to keep the ball rolling on Sunday with solid, but not spectacular, final-round golf after opening with a bogey only to bounce back with three birdies in his first 11 holes to extend the lead to three.

Then came the challenges with both T.J. Poston and PGA rookie Sahith Theegala applying the pressure. Theegala took a share of the lead on 15, driving the green on the par-4 hole and making a one metre birdie putt. He then overtook Schauffele with a three metre for birdie on 17 before finding trouble with a bladed wedge from a fairway bunker on the 18th to squander the lead and finish with a double-bogey six.

Schauffele’s subsequent lob wedge from 80 metres to a metre at the final hole secured his win.

“It feels really good,” said Schauffele. “This is a big win mentally. Just because I sort of had to check myself, you know what I mean? When you’ve been out here and things are going easy you just expect to play well all the time. Sometimes it’s good to take a step back. And I thought I did that this week.”

Schauffele earned US$1,494,000 and 500 FedExCup points, which moved him inside the top-10 in both money and points. He also picked up 54 world ranking points to jump four spots from 15th to 11th. 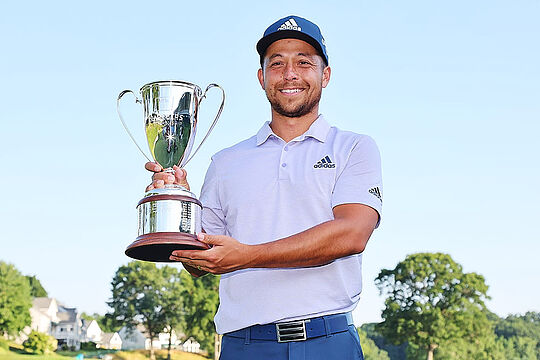 Theegala had walked to the 18th tee with a one stroke margin over Schauffele and had his maiden PGA Tour victory in sight. His drive was perfect yet his approach landed in the green side bunker leaving him with a terrible lie close to the lip where he took two to get out. His putt for bogey then brutally horse-shoed the hole leaving him with a short return putt for double-bogey. A brutal way to finish after making three birdies coming in on the 13th, 15th and the hole prior.

“Never in a million years did I think I would allow myself to blade it,” said Theegala of his bunker mishap. “All I had to do was chunk it. We even said, like, this is a 50/50 ball in terms of I got to try and just basically hit it just a hair behind it.”

“I just straight bladed it. I had room there. I don’t know how it looked, but I had room there. Just didn’t think I would let myself blade it. But I guess the moment was – and then from there it’s, like, got to try and make 5 now. Had a little more room. And I did the same thought process. I nearly bladed it again.”

It’s the second heartbreak for the 24-year-old after letting victory slip at the WM Phoenix Open in February, when his ball found water on the 17th to leave him one shot out of the Scottie Scheffler/Patrick Cantlay playoff.

Cam Davis finished the best of the Australians in a share of 56th position, a closing 74 hurting his position in the field. Marc Leishman, Brett Drewitt and Jason Day missed the weekend.