Scheffler goes to World No.1 with Dell Match Play win

American Scottie Scheffler has become the new No. 1 player in the world following his victory over Kevin Kisner on Sunday in the WGC-Dell Technologies Match Play.

Scheffler never trailed against Kisner, building a 3-up lead through six holes and closing the gate on any opportunities during critical times in the final. Scheffler secured the win with a par on the 15th for a solid 4&3 victory.

Scheffler led the whole way in his 3&1 semifinal win over Dustin Johnson, and he was unforgiving in the final in a match where Kisner didn’t win a hole.

“Pretty cool to do that in front of my family,” said Scheffler. 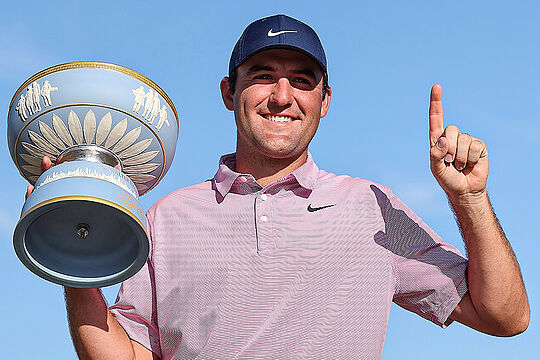 At 25 years of age, Scheffler is the sixth-youngest player to reach No. 1 since the world ranking began in 1986. Sunday’s win was his third title in his past five starts, having won the Phoenix Open in a playoff six weeks ago, followed by a win at the Arnold Palmer Invitational at Bay Hill.

The three PGA Tour wins add to his two Korn Ferry Tour wins in 2019 at the Evans Scholar Invitational and the Nationwide Children’s Hospital Championship since turning professional in 2018. He becomes the second player along with Hideki Matsuyama to win multiple times so far this season.

As an amateur Scheffler won the 2013 US Junior and was instrumental in the University of Texas’ three big wins win at the Big Twelve championships.

It took Scheffler 70 starts to get his first win on the PGA Tour and now in the last five of his starts he has three wins marking an incredible recent run of events. To date his total carer earnings following Sunday’s win is just under US$15 million, having collected just over US$7 million so far this season.

Scheffler will head to the Masters in a week as one of the favourites and certainly a player in top form.

Adam Scott was the only Aussie to make the round of 16 where he lost 1-down to Kisner while Lucas Herbert lost in a playoff to Japan’s Takumi Kanaya to progress to the round of 16.

Marc Leishman and Min Woo Lee failed to progress past round three.