Scheffler graduates to PGA Tour, Arnold on the edge

Scottie Scheffler earned his second win of the Korn Ferry Tour on Sunday and in the process a 2019-20 PGA Tour card and an exemption for the 2020 Memorial Tournament.

Scheffler shot 4-under 67 in the final round Sunday at Ohio State University’s Scarlet Course for a two-shot victory at the Nationwide Children’s Hospital Championship. He totalled a 12-under for the week and finished two shots ahead of Brendon Todd, Beau Hossler and Ben Taylor. 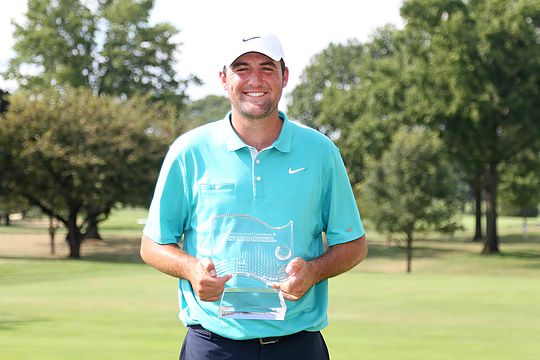 The first 25 PGA Tour cards were issued last weekend at the conclusion of the WinCo Foods Portland Open to the top 25 ranked players on the tour, which has Aussie Rhein Gibson already securing his playing rights on the main tour having notched an impressive eight top-10 finishes in 2019, including a win at the BMW Charity Pro-Am presented by SYNNEX Corporation.

The rest of the field which comprises Nos. 26-75 on the Korn Ferry Tour Points List and Nos. 126-200 in the PGA Tour FedExCup standings, are battling for the 25 remaining PGA Tour Cards.

Two tournaments remain on the schedule in the upcoming weeks with the Boise Open (Aug. 22-25) and the Korn Ferry Tour Championship (Aug. 30 – Sept. 2).

It’s a format that can bring tears to your eyes with so much on the line. You have to feel for 36 year-old Aussie Jamie Arnold, who is gunning for his first PGA Tour card after eight top-25 finishes and four top-10 finishes in 20 starts in 2019.

During Sunday’s final round, Arnold four putted the 71st hole for a triple bogey to finish two shots shy of securing his PGA Tour card enroute to a tied 11th result. Arnold can still secure a card with a top-25 finish in either of the next two events.

Curtis Luck, who spent the 2018-19 season on the PGA Tour to finished No. 175 in the FedExCup standings, is keeping his main tour hopes alive after a tied 7th finish on Sunday to move to 6th on the finals standings.

Cameron Percy also came two strokes shy of reaching the 200-point threshold estimated to secure a PGA Tour card for the 2019-20 season. Percy currently stands tied 10th in the final standings along with Arnold inside the desired top-25.

Cameron Davis is currently in a tie for 41st in the finals standings.