American Scottie Scheffler has claimed his first PGA Tour title from 71 starts taking out the WM Phoenix Open over Patrick Cantlay in a three-hole playoff.

Scheffler closed with a 4-under 67 to match Cantlay on 16-under at TPC Scottsdale. Cantlay, playing in a group ahead of Scheffler, had a bogey-free 67.

Scheffler and Cantlay matched pars on the first two extra holes on the 18th, with both players hitting the fairway and green the first time and scrambling to save par the second time. On the third trip up the final hole, it was Scheffler, who put an end to the tournament sinking a 12-metre birdie putt to claim the title and in the process collect A$2.04 million.

“To kind of put things together yesterday and get through all the mistakes I made today and still pull it out is pretty awesome. I’m just really thankful with the result.”

The 25-year-old Scheffler, a former US Junior Amateur champion and All-American at the University of Texas, moves to a career best of 9th on the Official World Golf Rankings.

The last three events on the PGA Tour have all produced first-time winners – Luke List at the Farmers Insurance Open, Tom Hoge at the AT&T Pebble Beach Pro-Am and now, Scottie Scheffler at the WM Phoenix Open. 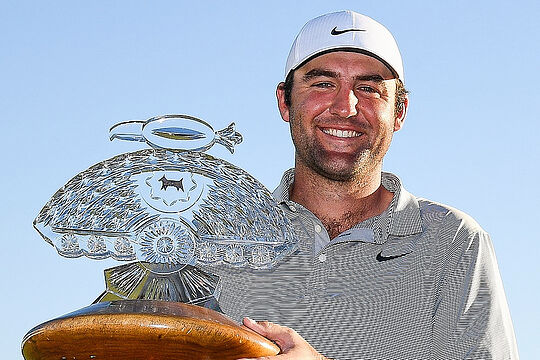 It wasn’t all clean sailing for Scheffler. Sahith Theegala, a 24 year-old PGA Tour rookier, who won the Australian Master of the Amateurs in 2020, was tied for the lead standing on the tee of the 17th hole drivable par 4.

However a cruel bounce near the green from his drive saw him end up in the water with the resulting bogey the difference between missing the playoff by a shot. Theegala, who was playing on a sponsor’s invite, still tied for third place with Brooks Koepka and Xander Schauffele and earns an exemption into this week’s Tiger Woods-hosted Genesis Invitational.

An All-American at Pepperdine University, Theegala claimed one of the major awards as the top collegiate golfer in 2020. He played the Korn Ferry Tour last season and did well enough to earn his PGA Tour card.

Lucas Herbert narrowly missed the weekend by a shot along with Cam Davis and Craig Hocknull.