It took Scheffler just three wins in just 42 days to reach the pinnacle of the World Rankings following his convincing 4&3 victory over fellow American Kevin Kisner in the final of the WGC – Dell Match Play Championship in Austin, Texas yesterday. 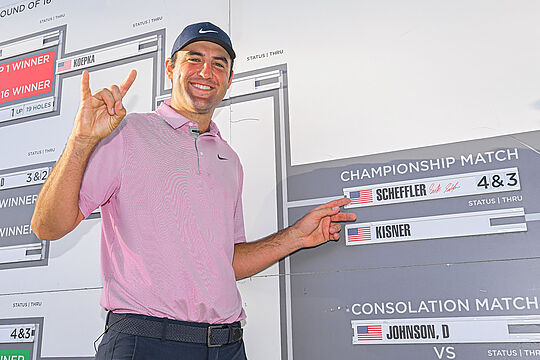 At the age of 25 year, 9 months and 6 days Scheffler ended Spaniard Jon Rahm’s reign of 36 weeks as World No. 1 thanks to three wins in his last five starts.

Scheffler won the WM Phoenix Open on February 13th, was seventh in the Genesis Invitational, won the Arnold Palmer Invitational, finishing T55th at the Players, and now he has won the WGC – Dell Technologies Match Play.

“My head is kind of spinning right now, to be honest with you. I’m obviously pretty happy, and I really can’t put into words what it felt like after Kevin conceded my six-inch putt or whatever”, said Scheffler.

“My head has just been kind of spinning. We took a lot of photos and now I’m sitting in here with you guys. So, definitely a lot of emotion coming off the green today. It’s been kind of a crazy past few months. I got my first win in Phoenix, and then I guess this is my third now, and golly, what a long week.”

“I really don’t know how to describe the emotion. I’ve thought about winning this tournament ever since last year. It left kind of a poor taste in my mouth getting so close and ultimately coming up short.”

“So, it feels really good to finish the job this time around”.

The outpouring of support for Scheffler could not have been stronger for the golfer born in New Jersey, but who grew up in Austin in attending Highland Park High School, and later playing golf at the University of Texas from 2014 to 2018. In 2015, he was named ‘Phil Mickelson Freshman of the Year’ while he was on the USA winning Walker Cup team.

Scheffler qualified for both the 2016 and 2017 US Open. He turned pro and secured his PGA Tour card with two wins on the secondary Korn Ferry Tour. Last year he made his Ryder Cup debut on the back of three top-10s in the majors – T8th PGA Championship, T7th US Open and T8th at The Open.

He was handed the Walter Hagen trophy after a convincing 3&1 win over Dustin Johnson in Sunday morning’s semi-final and then was never behind in the final against Kevin Kisner going 2 up after four, 3 up after six, 4 up at 14 and winning the match with a par on 15.

“I kind of kept reminding myself to stay patient. When you build up a lead on a guy like Kevin, it never really feels safe, kind of like my lead this morning on Dustin. I never felt safe. Dustin definitely proved it wasn’t safe this morning”, said Scheffler.

Scheffler is not contesting this week’s Valero Texas Open which makes his next event the Masters. He made the trip to Augusta National twice before and posted a pair of top-20s including T19 in 2020 and T18 last year.

What chance is there of being third time lucky and being fitted with a green jacket?