Scottie Scheffler survived a brutal Bay Hill layout to win the Arnold Palmer Invitational by a shot over Tyrrell Hatton, Viktor Hovland and Billy Horschel, closing with a 72 on a day where the world’s best struggled to break par.

The scoring average was 75.48 with only 10 players finishing the tournament under par.

In a final round that featured some of the toughest scoring conditions in years, Scheffler made key putts to save two unlikely pars, followed by a pair of lag putts to keep his momentum and secure his second PGA Tour win within a month and three starts.

“To be completely honest with you, right now I’m exhausted,” said Scheffler.

“I’m very pleased I didn’t have to play any extra holes today. When you get on such difficult golf courses like this, you just have to kind of keep your head down and know that mistakes are going to come. Today and really all this week I did a good job of kind of fighting back, really just kind of battling the golf course the whole time.” 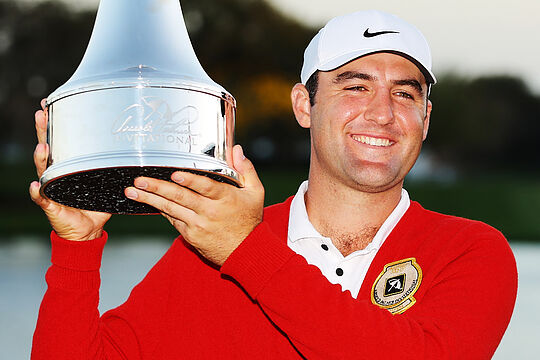 Scheffler earned US$2.16 million and 550 FedExCup points. Sunday’s win was his fourth professional title having won the Phoenix Open back in February, which added to his two Korn Ferry Tour wins at the Evans Scholars Invitational and the Nationwide Children’s Hospital Championship in 2019.

Scheffler’s best result in a major is tied 4th at the 2020 PGA Championship, however, he’s recorded four top-10 finishes in majors including a tied 8th at The Open Championship in 2021.

In a reflection of just how difficult the course played just two players broke 70 on Sunday while eighteen players posted scores of 78 or higher, including an 87 by Troy Merritt. Former World No.1 Rory McIlroy, who carded successive rounds of 76 over the weekend before dropping to a share of 13th finish, snapped a wedge in half in frustration and in a post round interview claimed to have been ‘punch drunk’.

Lucas Herbert finished the best of the Australians in a share of 7th position at 2-under-par a final round of 68, the best of the day, moving him twenty-six places up the leaderboard.

Scott reportedly declined a post final round interview on the basis that he had ‘nothing good to say’.

The best players in the world now head to TPC Sawgrass for The Players Championship, which features an incredible purse of $20,000,000. Justin Thomas won the title in 2021 by a stroke over Lee Westwood.