Schneider on top at Lake Macquarie

Germany’s Marcel Schneider has fired rounds of 66-68-67 to be at 15-under-par and a stroke ahead of Daniel Nisbet moving into the final round of the Lake Macquarie Amateur at Belmont Golf Club.

Nisbet started the third round a stroke in front of Schneider and traded birdies throughout the day on his way to a 3-under-par 69 to add to earlier rounds of 65-68. 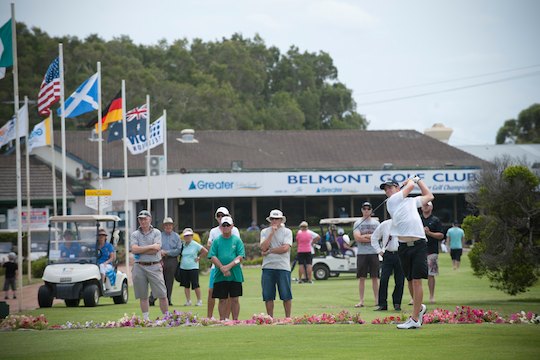 Marcel Schneider nails his drive down the 1st at Belmont Golf Club during the third round of the Lake Macquarie Amateur (Photo: Anthony Powter)

When Schneider overhit the 17th hole (Belmont’s 8th) leaving a delicate up & down to a tightly cut pin on the back right of the green, it looked as though the advantage had swung to Nisbet moving into the final hole.

Just as the German had done during the Australian Amateur final against Nisbet, Schneider responded with a superb par saving chip to keep him in the game.

The pair then landed their approaches on the 18th hole (Belmont’s par 5 482 metre 9th) in two with Schneider sinking a delicate five footer to respond to Nisbet’s birdie and maintain the one stroke advantage moving into the final day.

New Zealand’s Vaughan McCall fired a course record equalling 63, set by Jason Day in 2006, to move into third position at 13-under-par and a stroke ahead of Jake Higginbottom and Sebastian Kannler from Germany.

Ryan McCarthy, Brad Moules and Callan O’Reilly are in a tie for 6th at 10-under-par. 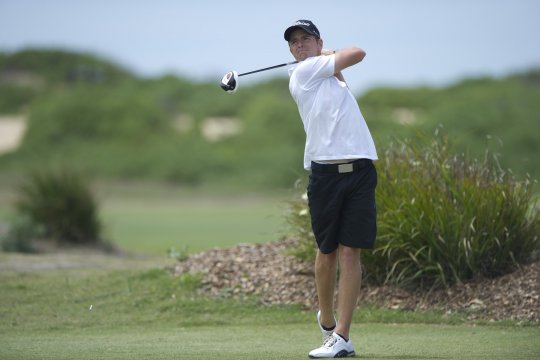 Marcel Schneider nails his tee shot on the 18th at Belmont Golf Club during the third round of the Lake Macquarie Amateur (Photo: Anthony Powter)

Belmont is a layout where players can shoot low if the conditions are favourable and the driver is working. At 6087 metres it a relatively short course by modern standards and the par-5′s – the longest being 482 metres – present no real challenge to a field of this nature.

With seven players within five strokes of Schneider, the German will have to go low again tomorrow to claim his second consecutive title in as many starts.

Daniel Nisbet looks to be the player that will rain on Schneider’s parade.

Local favourite Jake Higginbottom also is lurking dangerously close and arguably knows this layout better than anyone in the field.

Yet the focus remains on Nisbet and whether he can punch through and claim that victory.

Arguably the most consistent of the Australian amateurs this season – with three runner-up finishes from as many starts – Nisbet continues to create opportunities when the glove is on. It’s only a matter of time before he collects another title.

Claiming the Lake Macquarie Amateur and making amends for Schneider’s win from behind at the Australian Amateur last week would be timely for Nisbet. The last occasion Nisbet lifted the silverware was at the 2009 Keperra Bowl.

The final pairing of Schneider, Nisbet and McCall is one of contrasts and bound to create an entertaining day of golf. Schneider – the well grooved and methodical player – against Nisbet and McCall, both of whom don’t mind taking chances to get a result.