Six years ago, Charl Schwartzel started the year with a bang. Two tournament wins in his first four starts in 2016. Since then? A victory drought. He made 136 consecutive starts without a win while suffering a wrist injury that cut short one season.

It was a tough stretch to endure for the 2011 Masters champion and winner of 23 worldwide events. But he persevered – and took home golf’s biggest tournament prize, winning the inaugural LIV Golf Invitational London and its $4 million individual prize at Centurion Club.

In addition, Schwartzel’s Stingers GC won the team competition and the $3 million prize split between the four team members. In all, it was a $4.75 million payday for the 37-year-old South African – the biggest one-tournament total of his career.

“I really wanted to win again,” Schwartzel said after finishing at 7 under. “I worked very hard the last few years and there were signs of good golf and just haven’t really been able to be in contention.”

That wasn’t a problem this week. He led the 54-hole event wire to wire, opening with 65-66 to take a 3-shot lead entering the final round. He built the lead to five shots before suffering a double bogey at the par-4 12th, giving the rest of the field renewed hope. 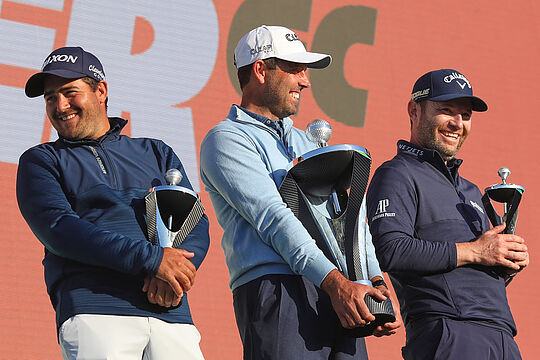 But Schwartzel bounced back with a birdie at the par-5 13th to shoot a 2-over 72 for a 1-shot win over Stingers teammate Hennie du Plessis. A third Stingers player, Branden Grace, shot 65 to claim the third-place spot on the podium via tiebreaker with Peter Uihlein.

“I hit a wayward shot on 12 and it sort of derailed me,” Schwartzel said. “And then from there on, I was just trying to hang in. Hennie was playing some really good golf, he was hitting good shots and putting pressure. So you know, you could see it was a bit of just get in the house at the end. … Couldn’t be more pleased and happy with how it turned out today.”

The rest of the South African Stingers, drafted by captain Louis Oosthuizen, were also pleased.

“I’ve worked hard to be in this position and to earn this amount of money,” du Plessis said. “I’ve got LIV Golf to thank for that, for giving me the opportunity. It’s been an incredible week and I’m very grateful and I’m very happy.”

Schwartzel and du Plessis provided their team’s counting scores for each of the first two rounds. Grace said he and Oosthuizen spoke on Friday night about also wanting to contribute. Not only did Grace shoot 65, but Oosthuizen’s 70 also counted.

“Today was really important for us to get a score that counted,” Grace said.

The team competition was not close, though. Stinger’s 20 under total for the three days was 14 strokes better than Crushers GC, which was captained by Uihlein. The all-English Majesticks GC took third at 5 under.

Despite a lacklustre individual effort, Smyth got lucky as part of the Crushers team, which placed second for the week on 6-under to earn a quarter of the US$1.5 million team purse along with the $US146,000 for his solo finish.

Adding Smyth’s second place at last week’s Asian Tour event in London together with his LIV Golf London total and the New South Welshman has made over AUD$1 million in just over seven days.