South Africa’s Charl Schwartzel romped to a 11-shot victory at the US$1 million Thailand Golf Championship on Sunday to end a frustrating 20-month title drought since the 2011 Masters Tournament.

The 28-year-old Schwartzel completed a wire-to-wire victory at Amata Spring Country Club with a final round of 7-under-par 65 after opening with rounds of 65-65-68. 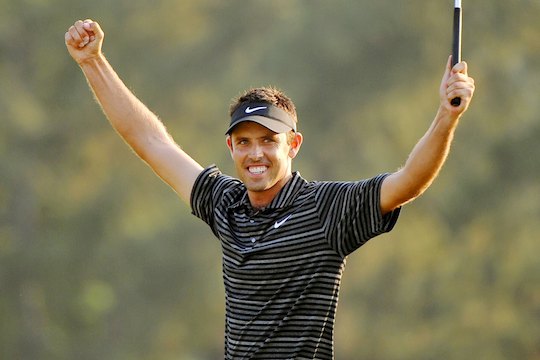 The victory made up for last year’s runner-up result where the South African ended seven shots behind inaugural champion Lee Westwood.

Thai youngster Thitiphun Chuayprakong fired a closing 70 to finish tied second with reigning Masters champion Bubba Watson, who finished with a superb 65 for a 14-under-par.

“It’s been a great week and I played some solid golf,” said Schwartzel, whose 11-shot winning margin at 25-under was the third highest on the Asian Tour.

“Winning is not as easy as everyone makes it out to be.”

“You know, it’s been quite hard work and it’s been a difficult year especially in the middle with injury.”

“It’s nice to put things in place and get the win that I’ve been looking for a while.”

The in-form Spainaird Sergio Garcia closed in outright fourthfollwoing rounds of 69-69-68-70, followed by Korea’s Park Hyun-bin, whose fifth placing earned him his Asian Tour card for 2013.

Scott Hend was the best of the Aussies finishing in a tie for 6th, with Darren Beck finishing 17th and Wade Ormsby 22nd.