Chinese fans were given a treat as the three marquee names in the field for the Nanshan China Masters – Charl Schwartzel, Darren Clarke and defending champion and local hero Wenchong Liang – did battle in the final round, with former Masters champion Schwartzel prevailing to win by a single shot.

Former Open champion Clarke, in search of his first win since taking the Claret Jug at Royal St Georges in 2011, held the lead but stumbled with a bogey from a horrendous lie around the greenside bunker on the par-three 17th after the South African had made his charge with birdies on the 15th and 16th to draw level. 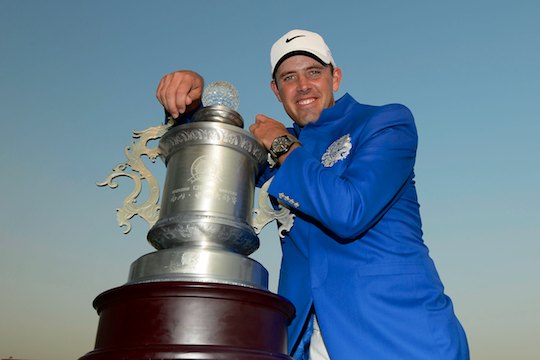 Schwartzel’s final round four-under 68 earned him his first tournament win of 2013 with Clarke and Liang tied for second.

Australian OneAsia rookie Rhein Gibson and Scott Strange were amongst a group tied for fourth a further two shots behind, while Ryan Haller and Scott Laycock logged top ten finishes tied for 9th at four-under.

Victory was sweet for Schwartzel only two weeks after the disappointment of a losing week at the Presidents Cup for the Internationals.

“It’s always very satisfying to win,” he said. “I’ve played a lot of golf tournaments and done a lot of travelling in the past few months and it felt like I’ve been playing really good golf with no results, so it’s nice to have something finally go your way.”

“Darren also hasn’t played very well this year, so it’s nice to see him compete this week. It’s never nice to lose, I know the feeling, but I know he can take a lot of positives from his performance this week.”

Clarke’s wretched run of form seems to be coming to an end with this result eclipsing the tie for 8th at last year’s Australian PGA Championship as his best result anywhere since winning the Open.

Clarke had played well to tie for 12th at the Alfred Dunhill Links Championship in his last start but could not get anything going on Sunday at Nanshan.

“I’m obviously disappointed with the day, it was another one of those days on the greens again where I couldn’t buy a putt from anywhere,” he said.

“Still, that’s golf and they’ve got a very good winner here, a fantastic winner, and that’s the way it is. It’s like that sometimes, unfortunately. “