Connor Syme proved the ‘Wizard of Oz’ after becoming the third Scot in the last 13 years to be crowned Australian Men’s Amateur champion.

The 20-year-old, who plays out of Drumoig Golf Centre in Fife, lifted his biggest title in the game after a hard-fought 3&2 success against Aussie Travis Smyth in the 36-hole final in Melbourne.

Syme, one of three Scots who reached the last-16 at Metropolitan GC, took early charge of the contest after three birdies in the opening six holes and battled hard to emulate the feats of countrymen Jack Doherty (2003) and Eric Ramsay (2005) by triumphing Down Under.

The Scot, a European Amateur Team winner in 2015 and a semi-finalist at The Amateur Championship in 2014, found the sunny and breezy conditions to his liking in Australia as he emerged victorious from a starting field of 234 leading amateur players.

The prestigious Australian Amateur title has a history dating back to 1894 and has also been won in the past by the Aussie professional foursome of Aaron Baddeley, Scott Arnold, Matthew Goggin and Brett Rumford.

Thanks to his victory, Syme has also secured a spot in the Emirates Australian Open in November.

“It’s not quite sunk in yet for sure, it’s absolutely amazing,” said Syme, a former two-time Scottish Schools champion. “It’s been a long week and I’m absolutely delighted. I’m following in good footsteps among the past champions.” 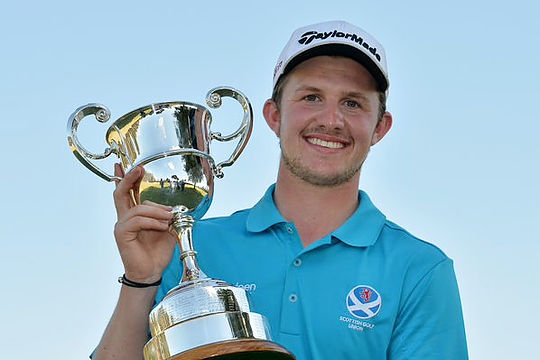 After Syme claimed an early two-hole advantage, Smyth responded and went one up himself after 11 holes. However, the Scot quickly hit back and secured a three-hole advantage at lunch after his three-under-par effort for the opening 18 holes.

Smyth’s bogey at the 19th took Syme four ahead and he increased the lead to five after 26 holes thanks to three more birdies. The home player refused to throw in the towel, though, thanks to a hat-trick of birdies of his own, before Syme’s impressive golf was rewarded with a closing par for victory at the 34th.

Syme, coached by father and pro, Stuart, added: “It was a really good match. I was five up after eight holes in the second round, and he made a good up and down to stay five down. “He then made an amazing birdie on the next from the trees and I thought he was coming back at me. He is a gritty competitor and it was tough, but I stuck to my game plan and it was good enough in the end.

“The course is amazing, I loved it. The challenge is so fair. If you hit good shots, you are rewarded for them. I had great support on the course, especially from (National Coach) Ian Rae and the other guys. Ian has been great all week, constantly giving us tips and watching our golf.”

For dad, Stuart, it was a long, long night, as he stayed glued to live scores and regular updates on social media from Golf Australia. But it was all worth it.

St Andrews-born Stuart, who moved the family from Dumfries in 2014 to take over the running of the Golf Centre at Drumoig, said: “We are totally thrilled for Connor, he really deserves this. He dedicates himself to his dreams and he is just a pleasure to help along his way.

“Drumoig has been huge for his development as we have such a terrific facility for him to use and he has taken advantage of that. But it’s a team effort and his mum, Deborah, and sisters, Megan, Leah and Rachel, are as important to him as I am as his father/coach. We all stayed up all night and followed the scores online. He called us a few seconds after winning and the celebrations were loud!”

Syme, meantime, will leap up the world amateur world rankings from 146th spot this week and has put down an early marker in the three-way fight to represent Scotland in the World Amateur Team Championship later in the year in Mexico.

He also has a date with the professionals to look forward to and said: “I’m really, really looking forward to playing in the Emirates Australian Open, it will be amazing. You know what the prize is at the start of the week, but you try not to think about it.”