Neil clinched the match with a 2&1 victory in the 36-hole final. The 18-year-old Blairgowrie golfer became the first Scot to win the Amateur Championship since Stuart Wilson at St Andrews in 2004. 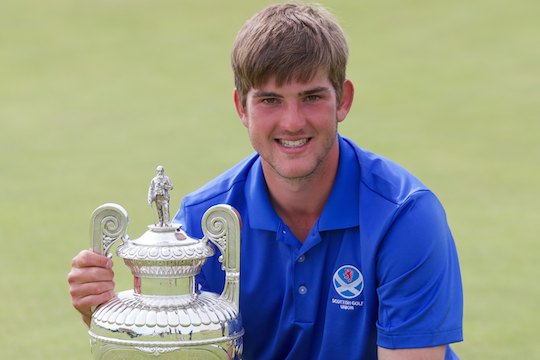 The victory earns the teenager an invite to next month’s Open Championship at Royal Liverpool and the US Open at Chambers Bay next year and the winner is usually invited to play in the US Masters.

Neil arrived in Portrush as the 38th-ranked player in the world after seven top-10 finishes, including three seconds and two thirds. His most recent was a playoff loss in the St. Andrews Links Trophy.

The finalists were all square after 27 holes of match-play golf, with Neil pulling away to lead by four with four holes to go, eventually closing the match out on the 17th green.

“To play in front of a big crowd like this is incredible,” Neil said. “This win is not just for me, it is for everyone that has helped me. I am so proud that my name will be added to the list of past winners.”

“It means a lot to me to have the chance to compete with major champions in the Open. It will be fantastic, it will be a strong test and it will be good to see how my game copes.”

For the Australian contingent this was a disappointing championship, just two players qualified – Cameron Davis and Geoff Drakeford – with Davis getting knocked out in the preliminary round and Drakeford progressing to just the second round before losing to Ireland’s Rory McNamara, 4&2.

The others failed to make the 36-hole 4-over cut mark with Todd Sinnott carding 12-over par to finish in a tie for 197th position along with Anthony Murdaca.