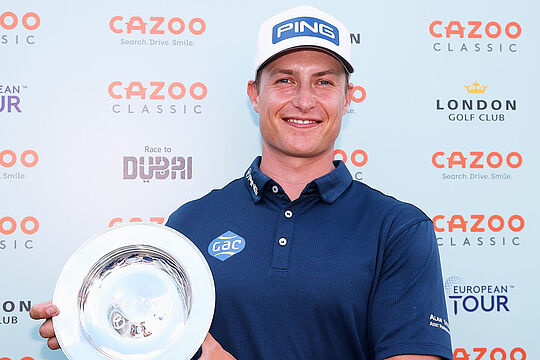 Alex Levy posted a sizzling 64 to finish runner-up at 15-under par but was forced to wait five-holes before Hill calmly parred the last to decide the Frenchman’s fate.

Hill joins good friend Grant Forrest not only as Tour maiden winners but with the pair combining for just a lucky 13th Scottish consecutive victory toast in the 49-year history of the Tour.

Hill said: “It feels brilliant and I’m delighted to win my first Tour victory. I’m happy with how I managed to play my last nine holes and I am really proud of what I managed to do.”

“This week I wouldn’t say I was in as good a position as last week but it’s hard to win a golf tournament and I am just very happy with how I played.”

“It’s really cool also to know Grant and I are the first Scots to win back-to-back in some time and even better as we’re both with Bounce Sports Management and they’ll be delighted with that.”

It seemed just a matter of time before the Kirkcaldy golfer would break through for a maiden Tour title having picked-up the first of five top-10s earlier this year in Saudi Arabia.

Last week, Hill had gone within a whisker of winning at the Fairmont Resort and later earned the praise of new Tour champ and good friend Grant Forrest when Hill led the victory ‘water’ spray over Forrest.

And Hill revealed how a text message from Forrest helped inspire him this week.

He said: “Grant sent me a really nice text message saying that you’re a really good player and it won’t be long before it’s your time.”

“I didn’t really expect that, so it was a nice touch and it’s nice to get messages from your friends and peers like that.”

The last time Scots won back-to-back on the European Tour was nine years ago when Paul Lawrie captured the 2012 Johnnie Walker Championship at Gleneagles and a week later Richie Ramsay won the Omega European Masters in the Swiss Alps.

There’s been two such similar feats in the last 20 years while there’s been Tartan back-to-back wins now on just 13 occasions in the 49-year history of the Tour.

Victory lifts Hill 10 spots to 22nd on the Race to Dubai and to a career high at 96th in the World Rankings.

After arriving in Europe just a month ago, Australia’s Bryden Macpherson got off to a slow start with a pair of missed cuts and a top-50 finish at the Cazoo Open.

Macpherson will be hoping to replicate his superb Australasian Tour form having won the Moonah Links PGA Classic and NSW Open earlier this year along with a runner-up at the QLD Open.

Maverick Antcliff was the next best of the Australians in 35th place unable to capitalise on back to back opening rounds of 68.