Australian Scott Arnold made a back nine surge on Sunday to claim his maiden European Challenge Tour title at the Cordon Golf Open in France.

The Sydneysider entered the final round one shot off the lead held by Dutchman Daan Huizing but after making the turn, was faultless in firing three birdies over the final nine for a two-under 68 and a two-shot victory, after completing the tournament at nine-under. 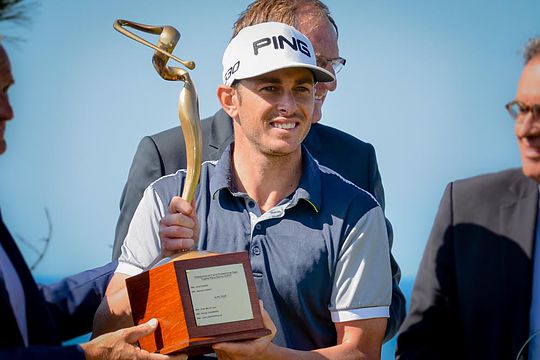 Huizing and Englishman James Robinson, who signed for a four-under 66, were tied for second place at seven-under par.

Arnold had been in impressive form in recent months, qualifying for and making the cut at this year’s Open Championship at St Andrews in his first start in a major championship.

“It’s my first win on the Challenge Tour so it’s really exciting,” Arnold said, “It’s my (30th) birthday next week so it’s like an early present. I have a flight to catch this afternoon, I think it’ll only hit me then.”

“I think when I played The Open this year, it really helped me. That was really good, I felt pretty comfortable out there.”

“I looked at the leaderboard for the first time on my way to the 16th green and I saw that I had a two-shot lead, but I still had two holes to go so I was telling myself not to get carried away, because if you make one or two bad shots it can quickly turn into bogeys.”

“So I’d rather make solid pars, hit the fairways, hit the greens. It would have been nice to finish with a birdie but I didn’t make the putt. It’s a very good day though.”

Three-time Challenge Tour winner Sam Walker of England was one of five players tied for fourth place on six-under while New Zealand’s Ryan Fox tied for 19th at three-under.

Arnold has moved to 18th place on the Challenge Tour’s Race to Oman Rankings, with the Top-15 players at the end of the season earning European Tour cards for 2016.