Adam Scott says the Presidents Cup needs a shot in the arm – an injection of something so that it’s not all over by the time the Sunday singles arrive.

He’s just not sure what. 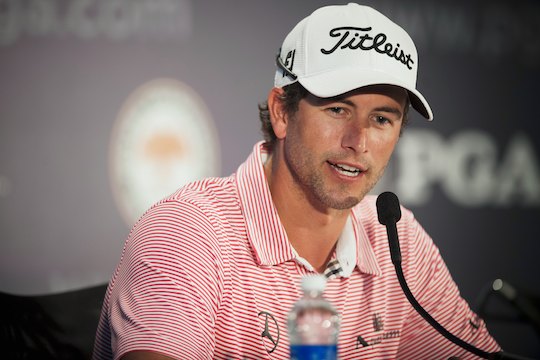 The Talisker Australian Masters champion would love nothing more than to see the Presidents Cup one day reach the same lofty levels of the Ryder Cup – even though he knows that’s probably not likely to occur in his lifetime.

“Someone needs to take a lesson from the Ryder Cup,” Scott admitted while competing at Kingston Heath, where he held off England’s Ian Poulter to win the Australian Masters.

“We’ve got to get the competition back into this event.

“The last three Presidents Cup have virtually been walkovers to the US, to be quite honest.

“Maybe we need to change the format so it’s not all done by Sunday.”

Naturally Scott has a point, although the Ryder Cup has history on its side, having been contested since 1927.

Still, even the Ryder Cup only began to draw the patriotism, now openly on display, since it included mainland Europe in the event.

Before that the Americans dominated the Ryder Cup and the UK and organisers spotted that it needed a revamp, which it gained thanks to the inclusion of players like Spanish aces, the late Seve Ballesteros as well as Jose Maria Olazabal and Sergio Garcia.

Now the Presidents Cup finds that since that infamous tie in South Africa in 2003, the Americans have won four straight Presidents Cups – and each of them by at least three points.

Apart from inviting Justin Rose and Ian Poulter to become Australian citizens, there’s really not a lot we can do to jazz up the Presidents Cup.

Except perhaps wait until history begins to play its part.