Adam Scott is just one round shy of capturing a second Australian PGA Championship after posting a third round 69 to move a shot clear of the field at 10-under par on the Royal Pines course on Queensland’s Gold Coast.

The World No. 18, and the highest-ranked player in the co-sanctioned field, birdied two of his closing three holes to break free on a day when five players had shared the lead at one stage. 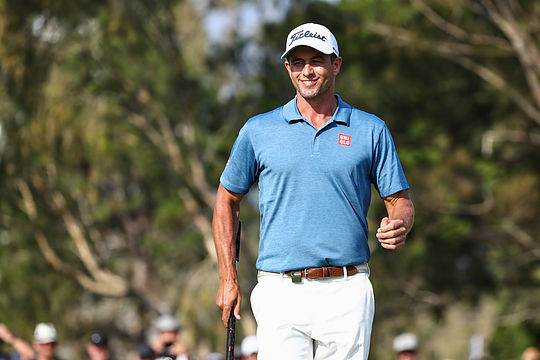 Scott, 39, won the title for the first occasion in 2013 and a victory would be the 30th of his illustrious career and his 11th European Tour counting title.

More importantly Scott would head into the Christmas festive season celerating what would be his first win since the 2016 WGC – Cadillac Championship.

“It’s incredibly bunched, and if it’s windy tomorrow it’s going to be hard for anyone to really separate themselves unless they just play an incredible round of golf, go out there and roll in a lot of putts,” said Scott.

“For me, my strategy is going to be the same. Unless I hole a lot of long putts, I don’t see myself just running away with this thing. I’m in for a fight.”

“It would be nice to cap off this year with a win here at home because I know what the confidence of that can do going into next year and just kind of make things a little more comfortable running into the Masters time.”

Good friend Wade Ormsby, who is yet to win on home soil, posted a 70 to be in second place at nine-under par.

For the second time this week, Ormsby navigated his way around the Graham Marsh layout without dropping a shot on his way to a 2-under 70 and expects that another mistake-free round will give him the opportunity to avenge his loss to Scott at the South Australian Junior at Royal Adelaide more than 25 years ago.

“It’s hard to kind of get out in front and go, but I guess any course, if you hit enough good shots and hole enough putts, you can get going,” said Ormsby.

“You need to putt well in order to do that, but you’ve still got to play the golf course on its merits.”

“There’s going to be some tricky flags tomorrow and there’ll be some gettable ones, so I’ll just keep plodding my way around and play the same type of golf I’ve been playing and see where that leaves me.

“I want to play in the last group, especially when it’s so bunched. It’s nice to be right at the end there where you feel like you’ve got not control, but you know what you have to do.”