Adam Scott arrived in Royal Lytham and St Anne’s Golf Club in England fresh from a break at home in Switzerland and determined to find the solution to his winless major record.

Scott is yet to bank a major and the 32-year-old knows his record will not be complete until such a triumph is added to his twenty-three worldwide tour victories. 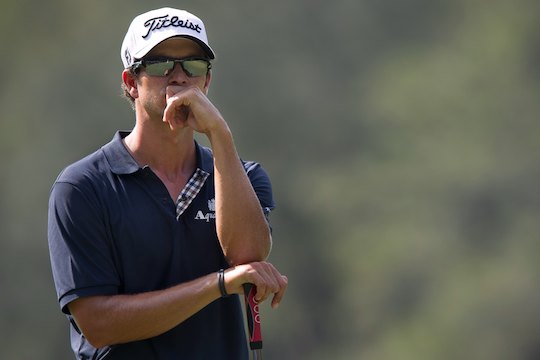 Adam Scott is determined to find the solution to his major record at the Royal Lytham and St Anne’s Golf Club in England this week (Photo: Anthony Powter)

For a player of Scott’s quality and experience it is a puzzling record, and one he cannot explain.

“I feel like that I have had my chances yet golf can be a funny game where you think you have it covered and a championship slips through your grasp,” said Scott.

Scott spearheads a 12-strong Australian contingent in the 141st Open at Royal Lytham and St Anne’s from Thursday and feels closer than ever to finally breaking his and Australia’s major drought.

Geoff Ogilvy was the last Australian to collect a major when he triumphed at the 2006 US Open, yet Scott has been our best performer in majors over the last two years.

Scott achieved his best finish in a tie for second place at the 2011 Masters Tournament alongside compatriot Jason Day, two strokes behind the winner Charl Schwartzel.

The world number thirteen held the sole lead of the tournament while playing the 71st hole, but four birdies in a row from Schwartzel meant Scott fell short by two strokes.

However, Scott said afterwards that he could only take positives out of the week and that his putting had never felt so good with the long putter.

In the week leading up to this year’s Open, the Australian remains confident, both with his short and long game.

“I know it’s all there. It’s just one of these weeks it’s all going to happen,” said Scott.

“I just feel good about my game. It’s up there, for sure, with the best of my career.”

Scott’s playing career took off in 2001, his first full year as a professional golfer, when he won the European Tour’s Alfred Dunhill Championship in Johannesburg, South Africa.

The following year he recorded two more European Tour victories, at the Qatar Masters and the Scottish PGA Championship.

Much has been expected from Scott, seen by many as the next Greg Norman of Australian golf.

It is not that Scott has disappointed his fan base. His record – outside of the majors – reflects his rightful standing on the world golfing stage.

Just under twelve months ago Scott triumphed at the 2011 WGC-Bridgestone Invitational, earning him his first career World Golf Championship. Enroute to winning the title he beat Luke Donald and Rickie Fowler by four strokes after a bogey-free final round of 65.

It was a peerless display of golf and Scott closed the tournament in style at Akron. The win returned Scott to the world’s top 10 for the first time in over two years, re-entering in 9th place.

The following week he finished 7th at the PGA Championship in Atlanta and since that time he has finished 8th at 2012 US Masters and in a tie for 15th at the recent US Open.

Scott has made 29 of 43 major cuts but only in the past two years has he found the consistency to challenge the majors.

This week at The Open he enters the field ranked 13th, our highest ranked player. It has been six years since an Australian collected a major title and Scott carries the hopes of the nation on his shoulders.

“The great thing about the Open is it’s probably the most open tournament there is and we’ve certainly seen that the last few years,” says Scott.

Playing fewer tournaments in a bid to peak for the majors is clearly paying off and once again not competing last week allowed Scott to arrive early in Lytham to prepare.

“I have purposely cut back my schedule to focus on the majors,” he says.

“That has given me more playing time and a lot more practice rounds prior to the tournament week, which has been good. Because I feel like I have a much higher level of comfort at the golf course.”

“I really know what’s out there in front of me and hopefully it will be my week.”