PALM BEACH GARDENS, FL: In just three events this new season Adam Scott has not only ended a six-year wait to win using a conventional size putter but in the process swept his way into favouritism to claim a second Augusta National Masters green jacket after a stunning Honda Classic success at PGA National at Palm Beach Gardens in Florida.

With legendary Jack Nicklaus looking on, Scott laid to rest once and for all any lingering clubhouse conversation over his putting prowess in posting a final round 70 to win by a stroke at nine under par.

Scott’s goal of becoming only the second Australian to win the Honda Classic was somewhat helped when Spain’s Sergio Garcia bogeyed the 16th and 17th hole, and while Garcia birdied the last and with Scott needing to hole a virtual tap-in two footer at the 72nd to claim victory.

“It was nice that it was just two feet, that’s for sure,” said Scott.

“It is certainly a sense of relief to win again, after being a year and a half I guess without a win.”

“It’s just getting tougher and tougher to win out here so to win today is great.” 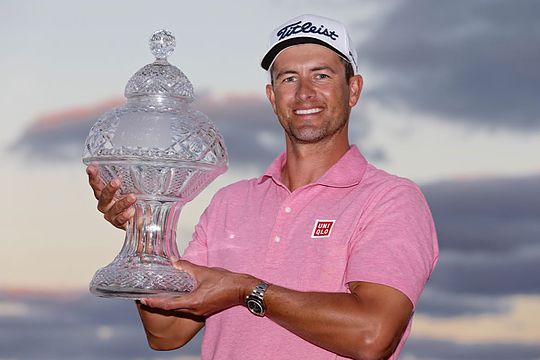 “Again, it just reassures me, I’m on the right track with the things I’m doing on the greens obviously and I’m just going to try and get better every week. And I think it’s in a great spot at the moment. If I can get better and better, then I like what’s to come.”

Scott had overcome a crippling 15th hole quadruple bogey on day three when leading by three shots and went into the last day of the $US 6.1m event sharing the lead with Garcia, who was in some good form having won the inaugural Asian Tour Ho Tram Open late last year in Vietnam.

What’s In The Bag – Adam Scott

However bogeys at nine and 10 saw Scott fall back to be tied with Garcia but then when Garcia bogeyed 11 and Scott birdied 12 the Australian was again two clear and from a position he was never headed.

Victory should see Scott move back inside the world’s top-10 and in the process remind the likes of the twenty-something year old’s Jordan Speith, Rory McIlroy, fellow Aussie Jason Day and Rickie Fowler that Scott is far from a spent force.

“I really wanted to win a lot, and also, I want to feel somewhat relevant still out here when it comes to being one of the best players in the world,” said Scott.

“That’s just down to my results. There’s no other way you can talk it in your head and try and build yourself up as much as you want, but at some point, you’re going to have to have the results to actually prove it and achieve.”

“Finishing second last week in the Northern Trust and this week’s a great test of golf, and I like where things are at, and hopefully it’s a move in the right direction to be in that kind of Top-10 players in the world.”

The win is Scott’s 13th PGA Tour victory, a first since winning the 2014 Crown Plaza Invitational at Colonial, and also a 27th success worldwide since turning pro in 2000.

However of significance it is Scott’s first victory using a conventional size putter to win the 2010 Singapore Open and also a first with a normal size putter in his bag since the ‘anchoring’ ban came into effect on January 1st earlier this year.

Scott is also only the second Australian in the 44-year history of the event after fellow Queenslander Stuart Appleby won the title in 1997.

But then it was Perth golfer Brett Rumford who Scott singled out for praise after ‘Rummy’ offered Scott a putting grip tip during the staging of the 2014 BetEasy (Australian) Masters at the Metropolitan Club in Melbourne.

“I can’t take the credit for this grip as it was actually Brett Rumford, an Australian pro who plays in Europe showed me the grip, and felt good,” said Scott.

“Again, it’s not exactly the same as the grip with the long putter, but it’s very similar I guess in philosophy. Keeps all my ankles and technical things in good order, so feels really comfortable. Just feels normal to me now.”

Victory at PGA National also continues an superb early New Year victory trend for Scott having won nearly a third of his 27 tournament victories before the staging of the season’s traditional first Major at Augusta National.

And the 35-year old, who has led at one stage late last week in Los Angeles before settling for a share of second, could not have won at a more important time in the new season with two WGCs and the Masters to be staged in the coming six weeks.

“It’s a huge stretch of golf coming up and it seems like this year, there are two six-week stretches or so that is just jam-packed with all the biggest tournaments in the world,” he said.

“I think the difference, Bernie, might be that I might be able to use — I know how to use the confidence of a win early in the season better now with my experience, I guess (smiling) and hopefully know what to do the next couple days to keep my game in good shape, so I tee off Thursday feeling just how I felt this week and then keep that going through to the next WGC and on into the Masters.”

It had been earlier in the week of the Honda Classic, Scott revealed he had ‘stirred the pot’ in having packed-up and shipped one of his long-handled putters towards the end of last year to St. Andrews in Scotland, and as a retirement present for out-going R&A CEO, Peter Dawson.

Dawson saw the funny side of Scott’s gesture replying: “I will put it with all the other obsolete clubs.”

Now with a first victory in only his third event of 2016 since the anchoring ban came into effect Scott joked: “It’s in a good spot for sure. Hopefully the (British Golf) museum (smiling)”.

Fellow Queenslander John Senden finished in a four-way tie for 10th place for his best finish of the 2015/16 season. The 44-year-old had only made fours cuts on the PGA Tour since October last year.

Stuart Appleby continues to show glimpses of a return to form with a final round 68 leaving him in equal 37th to add to his 26th place finish at last week’s Northern Trust Open.

World number three Rory McIlroy was the biggest casualty of the week with back-to-back rounds of 72 leaving him one shot outside the cut line in just his second tournament on the PGA Tour since November last year.