Masters champion Adam Scott warmed-up for his Augusta National defence next month with a PGA Tour equal career low and a share of the Bay Hill course record after a sizzling 62 on the first day of the Arnold Palmer Invitational.

It was the sixth occasion Scott has shot 62 on the PGA Tour with the last occasion coming on the opening day of the 2011 WGC – Bridgestone Invitational and what would become his first and only WGC success.

As well, Scott’s round was just one shot shy of his career best of a 61 he shot on the final day to win the 2008 Commercial Bank Qatar Masters. 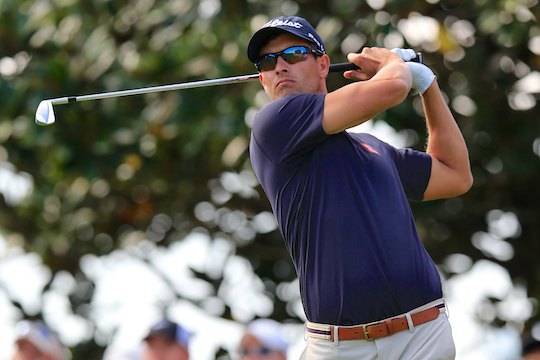 Adam Scott tees off during the first round at the Arnold Palmer Invitational (Credit: Fran Caffrey www.golffile.ie)

“It’s maybe a little surprising. I don’t know where it came from, but the putter certainly got hot today.”

Scott is making his first appearance at the Arnold Palmer Invitational since 2009. He’s missed the cut in his last two starts; his only top-10 finish in six previous starts came in 2004, when he tied for third.

“I just had a few frustrating years here and left it off the schedule,” said Scott. “Coming back fresh was obviously a good thing.”

“But I like the changes they’ve made since the time I have not been here. And today was just one of those days where the hole was a bit like a bucket.”

However while he talked about coming back fresh it had been a restless night for the Queensland-born Scott who is struggling with flu-like symptoms.

“I was up nearly every hour last night and just couldn’t breathe,” he added.

“I’ve got like a mild dose of flu and trying to sleep last night I was just constantly sweating, so hopefully it’s only a 24-hour bug as I was feeling really run down but then I’m starting to flushing out of me.”