Scott hopeful Kiawah experience will pay off at PGA

There are only a handful of players lining up this week at the 2021 PGA Championship that were at Kiawah Island when the tournament was last played here in 2012.

And one of those is Adam Scott. 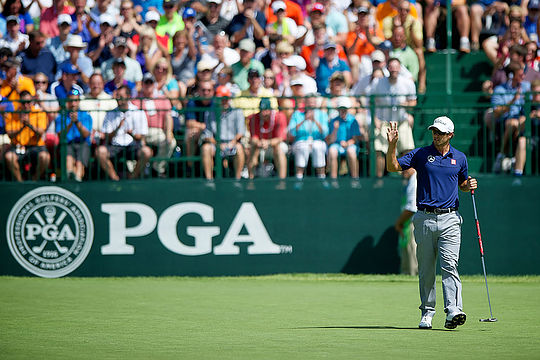 That year, the Queenslander arrived in South Carolina fresh off a devastating loss at the British Open where he inexplicably bogeyed the final four holes for a 5-over 75 total to finish one shot behind winner Ernie Els.

To his credit, Scott bounced back a month later to put himself in contention at the PGA Championship, entering the final round in a share of third and just four shots behind Rory McIlroy.

Scott fell away again in the final round with a 73 to slip back eight places into a tie for 11th place alongside fellow Aussie Geoff Ogilvy while McIlroy ran away with the tournament following a final round 66 for an eight-shot victory.

“I remember the week in 2012 quite well. I was fresh kind of off a loss, or losing the Open Championship. I remember a strong feeling like I wanted to make up for my mistakes at Lytham and try and put it behind me quickly.”

“I just didn’t really get the momentum going over the weekend, and obviously Rory did and kind of ran away with it, and he played at a different level than anyone else here that week. His driving was superb and obviously made a lot of putts.”

Of course, it was just eight months later that Scott would secure the biggest win of all, and one that McIlroy has yet to match, in winning the 2013 Masters.

This week marks the 21st time that Scott has teed it up at the PGA Championship and with that sort of experience and a major already under his belt at this very course, Scott was asked if there were any secrets to mastering the tough seaside course.

“For everyone else in the field that week [in 2012], I think they saw what a challenge Kiawah is. It was a brute of a test…and it will be again this week.”

“It’s not really the sort of course that there are hidden secrets that I gained out of 2012, but I just think when you talk about this kind of time period and veteran — I mean, the experience of just playing so many tough events and just having a good understanding of the patience that’s required, knowing ahead of time the test that you’re going to face, I know there’s going to be situations this week that are not ideal for me, and I’m just going to have to do my best to get out of it and turn it around,” said Scott.

“Of course I played four rounds here nine years ago, and I played quite nicely. That’s a nice memory for me.”

“I remember watching guys who I thought were a bit old 15 years ago and stuff and just how calmly they played in these tough conditions and just managed to hold it together and not shoot a bad score and not shoot themselves out of the tournament.”

“And I think that’s a big thing that I look at when I stand here and just look at the flags blowing and know how difficult it is out there, that I’ve got the experience to kind of hold it all together when it gets tough.”

With 6 top-10′s in 20 starts, including two 3rd places, the PGA Championship has been good to Scott. However, the 40-year-old has just one top-10 to his name this season on the PGA Tour and will need something special to be in contention on Sunday.