It didn’t take long for leading Australian golfer and the reigning Masters champion, Adam Scott to be caught up in last week’s concluding thriller to the England versus Australia First Ashes cricket Test Match.

Australia lost the opening match of five by the smallest of margins, and also in somewhat controversial circumstances, but for England to go one nil up in the five Test Match series.

Apart from Scott’s stunning Augusta National success the outcome continued a disappointing past few years for major Australian sport with the proud nation winning just one gold medal at the 2012 London Olympics and just recently losing 2 – 1 to the visiting Lions rugby side.

Of course in April, Scott proudly became the first Australian in the history of the Masters to be fitted with a famed green jacket.

However with the second Test Match starting tomorrow at Lords and on the same day as the 142nd Open commences Scott was asked if he thought he could lead an Australian sporting fightback here on the East Lothian links gem. 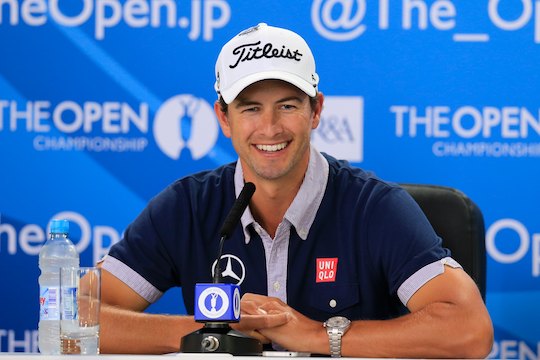 Adam Scott talks to the media ahead of the 2013 Open Championship (Credit: www.golffile.ie)

“Are you giving our cricket team no hope, are you, the rest of the summer?” said Scott smiling.

“I didn’t see much of the Test Match last week but I did watch the run chase on the final day, and yes, it was incredible.”

“Look, that would be a fun story line if I myself or another Australian golfer could win this week.”

“But hopefully, absolutely I would love to get in here this week and maybe spur our cricket team along to levelling the Test series.”

“It’s a tough time being an Aussie over here in the UK at the moment, to be honest with you, I move around town very quietly.”