Adam Scott lost his spot at the top of the leaderboard at the PGA Championship after America’s Jason Dufner shot a 63 course record at Oak Hill Country Club and in the process matched the record-low major round. 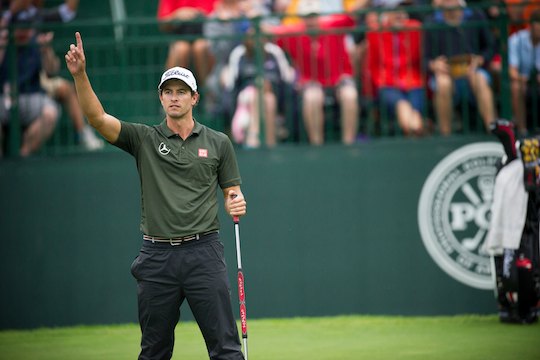 Adam Scott Reacts to his birdie putt at the 2nd hole during the second round of the PGA Championship at Oak Hill Country Club (Photo: Anthony Powter)

Stellar rounds by Justin Rose and Webb Simpson kept the Masters champion from pulling away from the field.

Dufner was the player of the day with his blistering round of 63 after opening with a 68 to be at 9-under.

Dufner became the 12th player to shoot 63 in the PGA Championship. Steve Stricker was the most recent to do it, in the opening round two years ago at the Atlanta Athletic Club. 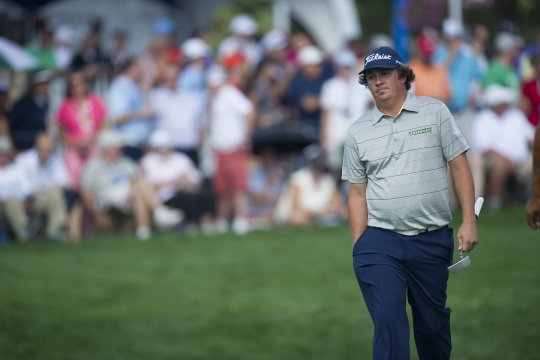 American Jason Dufner fired a course record to take the lead after the second round of the PGA Championship at Oak Hill Country Club (Photo: Anthony Powter)

Despite being two behind Dufner heading into the weekend, Scott remains optimistic about claiming another major title.

“Starting a couple back is a nice place to be,” said Scott.

“The pressure is off and you can get out there and see how you are going. You just have to be tough and grind it out no matter how it’s going.”

In contrast to yesterday’s near peerless round, Scott struggled a little with his putter, missing a few critical putts inside 10 feet.

“I was just a little off with the putts that you would really expect to make,” said Scott.

“The ten feet ones, I was probably at 50 percent today. I had some real chances, especially on the front nine, and then just missed a few coming in. Maybe I’ll make them all on the weekend.”

Matt Kuchar fired a 66 to add to his opening round of 67 to be tied with Scott alongside Jim Furyk at 7-under.

Justin Rose, Henrik Stenson share fifth place at 6-under, with Robert Garrigus and Steve Stricker a shot back at 5-under.

Marcus Fraser has played wonderfully in his opening two rounds with scores of 67-69 to be in a share of 9th place going into the weekend.

A closing bogey on the 9th the only blemish in Fraser’s game in what was otherwise a stellar performance by the European Tour player.

John Senden and late entry, Matt Jones, made the cut with Jones on the number at 3-over.

Brett Rumford and Geoff Ogilvy missed the weekend along with former world number one, Luke Donald.

Tiger Woods fired a 70 today and sits in a tie for 38th and will have his work cut out for him to finally claim his 15th major title.