Australia’s Adam Scott has surged into outright second place and sits two strokes behind two-time US Open champion, Brooks Koepka following the third round of the US PGA Championship this morning.

Scott, who has slipped back to 76th in the world golf rankings, bogeyed just one hole and looks in great form heading into the final round tomorrow. The Australian is eyeing off his second major and the first since claiming the US Masters in 2013.

“First time in a while being really in contention, I didn’t realise until kind of on 17 that Brooks had dropped a couple shots, so I was a little hot at myself on 15 from making a bogey from nowhere, really,” said Scott.

“To come back birdie, birdie and even have a look on the last for birdie as well was really good, because definitely playing 17 the juices were flowing a little bit, I was feeling like I’m in the tournament and certainly has been awhile since I’ve really been feeling that, so it was nice to make a couple birdies while the adrenaline was up.”

However, standing in the way of Scott’s major chances are a host of the world’s biggest names in golf.

In a three-way tie for third and three off the pace are world No. 7 Jon Rahm, world No.9 Rickie Fowler alongside early round leader Gary Woodland. 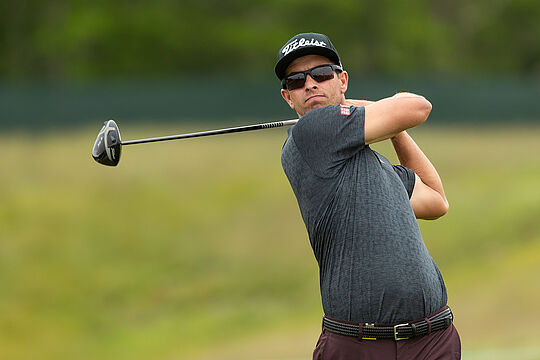 Woods finished off his delayed second round earlier in the day in superb form with a 66 and then followed that with another round of 66 but was clearly running on empty towards the end of his third round after playing 29 holes of golf in one day.

The 42-year-old reeled off five birdies in his first nine holes, giving back just one shot with a bogey at the par 4, 5th hole. However, from the 9th hole Woods was unable to make a further move carding ten pars in a stretch that may cost him heavily tomorrow.

“I’m tired. I am definitely tired. 29 holes, it’s not necessarily the physical, it’s this mentally grinding that hard for 29 holes in this heat. It was a long day.”

He put himself in position but missed many chances including three-putting the par 5, 17th hole where he had a look at an eagle and then missed another birdie chance at the 18th.

“The overall day, I feel like I played well today. I played 29 holes…I thought I played really clean cards, really clean rounds. And I just wish I could have got myself a couple more shots closer to the lead, especially with 17 the way it’s playing,” said Woods.

Marc Leishman carded a two-over 72 to slip back into a tie for 71st while Cameron Smith failed to capitalise on a superb second 66 and ended the third round in 77th place.