Augusta, Georgia: To use a real a well-used Australian expression – Adam Scott was a cool as a cucumber on the opening day of his Masters defence.

Wearing a near Augusta green looking shirt the Aussie golfing wonder reminded everyone of his intention to not only claim a second straight ‘Down Under’ success but become only the fourth player in Masters history to win back-to-back Masters titles. 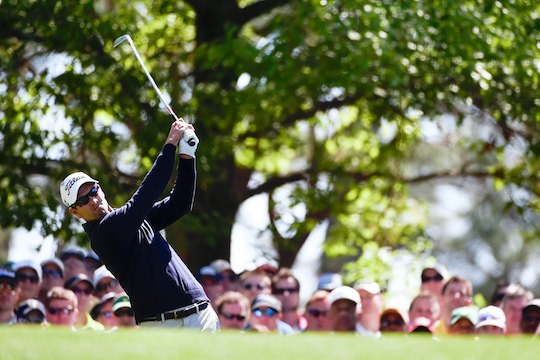 Adam Scott is off to a flying start in defence of his Masters title (Credit: Matt Harris)

After the pressure-cooker environment a year ago, Scott posted the most comfortable three under par 69 in any of his prior 44 rounds of Augusta National.

It left the Queenslander in a three way tie for second and just one shot behind American Bill Haas.

There was just one blemish to a near perfect round when, after getting a standing ovation at the 12th tee, he duly put his 9-iron tee shot into Rae’s Creek taking a double bogey ’5′.

“There’s no doubt winning the Masters last year had me a little more comfortable on the first tee than I’ve ever been in the past,” he said.

“I didn’t have the legs shaking and nerves jangling for six or seven holes like usual, so that was enjoyable for me today.”

“Getting off to a good start in a major is huge, because I think they are the hardest tournaments to kind of chase.”

“Birdies aren’t that easy to come by usually at majors and if you’re six back, five back, 10 back after the first round, it’s a hard three days in front of you to peg it back.”

“You almost have to play flawless. So to get off to a good start is key.”

There was a huge cheer when Scott walked onto the tee and that continued when the starter, in a deep Georgian accent, announced on the first tee: “Fore, please. Adam Scott now driving”.

And that applause continued for near five hours as Scott plotted his away about the Georgia golfing gem and right to the final green.

“The reaction today was a thrill, really,” said Scott.

Scott made a second birdie at the par-3 sixth then another at the par-5 eighth to reach the turn at three-under.

At the 10th hole, where he sealed his playoff win over Angel Cabrera last year, he drained a 12-foot downhill putt to reach minus four before briefly losing his concentration.

When he arrived at the par-3 12th hole, the spectacular middle leg of Amen Corner, the crowd instinctively rose to applaud him.

He tipped his cap and flashed a big smile then plopped his tee shot into Rae’s Creek and missed a four-foot putt to sign for a double.

“The memory that will stick with me forever today was walking up to the 12th tee and everyone getting out of their seats as I approached there,” said Scott.

“It was great – but then I went and hit it in the water (laughing).”

“I just lost a little focus on that shot and didn’t commit fully to it and paid a price on that one.”

Scott did not drop any more shots in his round but did miss his chance to post a better score when he three-putted both par-5s on the back nine as he started to struggle with the notoriously fast greens.

But he did manage to salvage a long par putt on the 18th to match his opening round score from last year and become the first defending champion in 13 years to break 70 in the first round.

“I was very happy with the way I played today tee-to-green,” he added.

“It was really how you hope to come out and play at any major, and especially the Masters,” he said.

“I hit the one poor shot on 12, which obviously cost me a couple of shots. But very pleased to get off to a good start.

“My goal teeing off today was to play three good days and get myself in contention and give myself a chance like I did last year.”