Adam Scott’s pursuit for the triple crown of Australian golf remains on track after an impressive start to the Australian Masters at The Royal Melbourne Golf Club.

Scott, the defending champion, carded five birdies in the first 15 holes to move to the top of the leaderboard during the opening round. 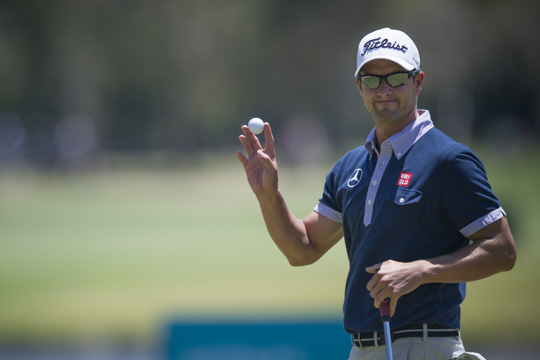 Coming off his Australian PGA Championship victory on Sunday, the world number two is tied with 23-year-old German Max Kieffer.

Scott, the US Masters champion, briefly held the lead outright after making four consecutive birdies but a bogey on his second last hole saw him slip back. He finished his opening round at 4-under-par to be in a share of second place.

South Australia’s Nick Cullen fired an opening round 6-under-par 65 to take the lead, two strokes ahead of Scott.

Despite not taking the opening day lead, Scott said he was satisfied with his score.

“I’m happy with the round but I haven’t done much practice since last week so I thought I’d try and sneak a few balls in,” he said.