Scott, Leishman determined to have fun on Sunday

Barring an absolute miracle, which would include a complete collapse from runaway leaders Denmark, Australia’s defence of the World Cup of Golf is on life support with one round to play at Kingston Heath.

Adam Scott and Marc Leishman combined for a two-under par 70 in Saturday’s Foursomes, a solid round of golf around a testing layout that can jump up and bite you, but nothing like the low round the pair needed to mount a threat on Sunday.

“We’ve hit a lot of good putts that have looked like going in and burning the edges.” bemoaned Leishman.

“Hopefully they’ll drop tomorrow and we can try to beat Denmark’s score of yesterday (Friday). I think we’ll have to.”

The pair have been solid but far from spectacular on all three days and still in the middle of the pack at 4-unde, ten behind the Danish duo, with a round to play. 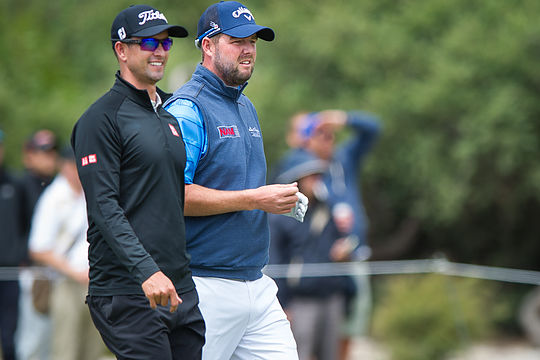 While they made more birdies on Saturday than they were able to put together in Thursday’s foursomes, they were not able to leave themselves in as many good positions as they needed to give themselves a realistic run at the leaders.

A case in point was at the 16th where Leishman pushed his approach shot to the adjoining 9th green, much to the amusement of Americans Rickie Fowler and Jimmy Walker who were playing that hole.

Scott hit a wonderful lag putt up and over a steep slope to allow Leishman the opportunity to salvage par, a theme that had been repeated on a number of occasions on the back nine alone when the pair had found themselves in difficulties on or around the greens.

“I think we’re just both disappointed nothing’s going in for us out there. The support has been great but the couple of chances we’ve had, we haven’t taken and it’s just a grind.”

Scott said, while reinforcing the point that the pair were still enjoying themselves and looking forward to playing well in Sunday’s four-ball finale.

“We may have left it too late but we’ll never give up.” Leishman added.

“There’s still a bit at stake, We’ll play well and it’s more fun making birdies, so even if we don’t have a chance to win, we still want to make lots of birdies and have fun.”