A second round 3-under-par 68 has seen Adam Scott move up the leaderboard at the Australian Masters being held at Metropolitan Golf Club in Melbourne to be within striking distance of the leaders moving into the weekend.

Scott, who is seeking to become the first player to win three consecutive Australian Masters titles, is six strokes behind second round leader, Michael Wright, who fired rounds of 67-68 to sit at 9-under. 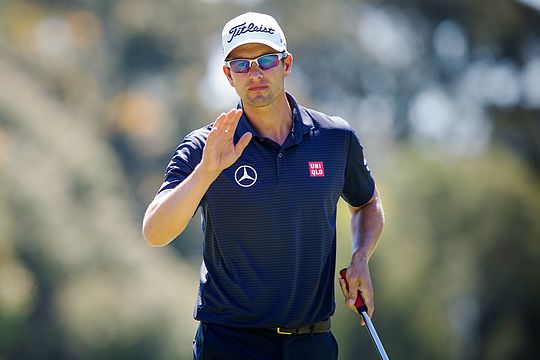 Adam Scott thanks the crowd on his way to a superb second of 68 at Metropolitan today (Credit: Anthony Powter)

Paul Spargo is in second position at 7-under, two behind Wright, with amateur Todd Sinnott and Richard Green in a tie for 3rd at 6-under.

Scott was out early making his move with three birdies and a eagle on the opening nine, his only blemish a double bogey on the par 5 4th hole. The world number two’s back nine included a birdie on the 10th which cancelled the bogey on the 16th for a 4-under-par 68.

“The course was really there to be had, and I got off to a nice start through ten holes, I was feeling pretty good,” said Scott.

“But unfortunately I slowed up on the back nine, and a couple of random wedge shots cost me, really, and I lost momentum for the day.”

“But you know, kind of moved up some positions on the board, and within shouting distance, at least, of the lead.”

Scott knows he’ll have to play some low scoring golf over the weekend to catch the leaders, yet he remains optimistic about his game.

With all the focus on Scott, Wright has quietly been going about his business and it’s just the way the 40-year-old Queenslander likes it.

“This is a golf course where you’ve got to play the course,” said the two-time Australasian Tour winner.

“I’m not concerned what he’s doing. Obviously he’s [Scott] is a fantastic player and I would expect him to play well over the weekend but I expect myself to play well too.”

Todd Sinnott is a member at Metropolitan and opened with a 67 after firing a 1-under-par 71 today. Sinnott is capable of ripping a course apart with his length off the tee and is well placed heading into the weekend.

“I’m obviously not here to make the cut,” said Sinnott following his second round.

“I’ve played all right in some pro events before, in Perth four weeks ago. I feel pretty comfortable out here.”

“Top ten at the start of the week would have been a pretty good result. But I’ve put myself in a nice position going into the weekend, so just do as good as I can and see what the result brings.”

Geoff Ogilvy is also well positioned to win his first Green Jacket at 4-under-par following rounds of 69-71 to be in a tie for 7th, five strokes from Wright.

The cut came in at 2-over-par with former champion Stuart Appleby and Aussie young gun Oliver Goss missing the weekend.