Scott, contesting his first event of the New Year, displayed all the talent that has earned him a Masters victory and proudly now a further 30 victories around the globe in posting a brilliant final round 70 to win by two shots at 11-under par.

Scott, 39, also captured back-to-back victories for the second time in his career after closing out 2019 with a win at the Australian PGA Championship on the Gold Coast.

The proud Australian went into the final day tied at the top on 10-under par with World No. 1 Rory McIlroy and American Matt Kuchar.

The trio each birdied the opening hole and while Scott also birdied the third, he stumbled in dropping three shots in two holes at the fourth and fifth holes while McIlroy dropped four shots at the fifth and sixth holes.

Scott managed to regroup brilliantly from his mishap whereas McIlroy was unable to bounce back and went on to post a 73 for a distant share of fifth place at eight-under par.

Back in 2005, Scott won at Riviera in a playoff with Chad Campbell when the constant rain reduced the event to 36-holes.

Scott was awarded the full prize cheque, World Ranking points and the win appears on Wikipedia and on European, Asian and Australasian Tour records but is still not officially recognised on PGA Tour records. 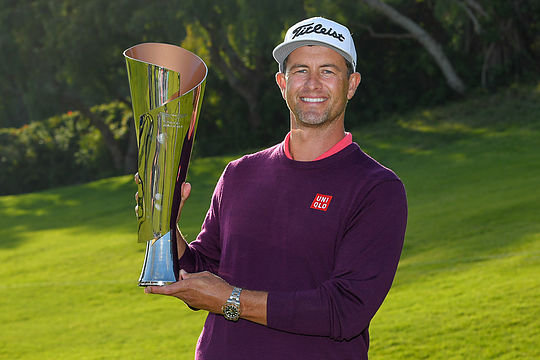 “When you win and then you’re told it’s not a win, that was not so good. Even though I had the trophy, it was not official.”

“So, that has been just a bit of motivation for me to again win here and to now have an official victory at Riviera and the Genesis Open is extremely satisfying.”

“Riviera is a place I love for many years and where I played well at a lot of times, so to now get an official victory among one of the best fields we will have this year feels very, very good.”

It will not be lost on Scott also, in playing alongside McIlroy, that he also gets revenge on the Northern Irishman who had denied the Australian victory in a two-shot turnaround on the final green at the 2013 Australian Open.

Also, Scott is remarkably the seventh Australian to win in the past seven weeks, on four different tours and on three different continents.

His win will see Scott jump from 14th to the new World No. 7.

Marc Leishman was the only other Aussie to make the cut but a final round 74 saw him fall into a share of 43rd place.

The next stop on Tour the world’s best players is the $10.5m WGC-Mexico Championship in Mexico City with those who didn’t qualify heading to Rio Grande for the $3m Puerto Rico Open.