Augusta National winning hero Adam Scott fought back from dropping three shots in two holes early in his round to maintain his lead despite Rory McIlroy storming his way into contention after two rounds of the Australian Open at Royal Sydney.

Scott, as the reigning Masters champion, shot a round of a two under par 70 to move to 12-under par and two strokes clear of McIlroy, who was out earlier in the day to post a seven under par 65 and finish on 10-under par. 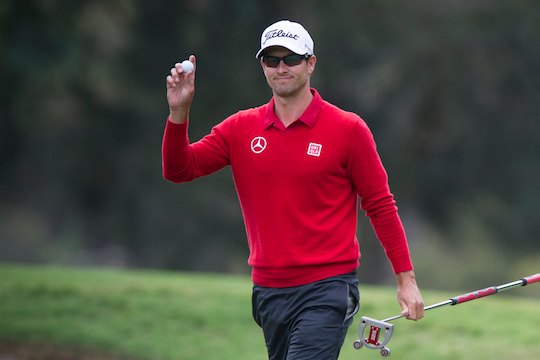 Adam Scott thanks the fans during the second round of the Australian Open at Royal Sydney (Credit: Anthony Powter)

McIlroy’s effort was the fourth occasion he has shot a 65 this season and just a stroke more than a season best of 64 he recorded in August’s FedEx Cup opening Deutsche Bank Championship in Boston.

Scott headed into the second day leading by three shots and extended that to five when he birdied the first and then holed a 50-yard chip shot for birdie at the third hole.

Scott, who is seeking to become only the second player to capture Australasian Tour ‘Triple Crown’, then double bogeyed the fourth and dropped a shot at the next to find himself trailing a stroke behind McIlroy.

However Scott regrouped in the windy and sometimes rainy conditions to grab back-to-back birdies at seven and eight and also at the 12th and 13th holes but then finishing bogey, birdie, bogey and just missing by millimetres a birdie at the last.

“It was a tough afternoon with plenty of good stuff in there but then I made a few mistakes in the tricky conditions but overall it was pretty good and given how difficult it was, I was pleased I held it together pretty well,” he said.

“It was a like a five club wind on a few of the earlier holes so it was a day where all you could do was just hang on and try and hit as many good shots as possible.”

“And while I managed a good few birdies, if you were slightly off the bogeys were easy to come by.”

In a promoters dream match-up, Scott will now play the third round in the company of McIlroy and while Scott has already tasted success four times this year his 24-year old rival, apart from defeating Tiger Woods earlier this month in China, is still looking for a first Tour victory in 2013.

“I’m really looking forward to playing alongside Rory and it’s another good leaderboard, and like I said all week it’s going to be a tough one to win,” Scott added.

“There are plenty of guys in the mix and I am going to have to play some golf as there is plenty of birdie opportunities out there.”

Australia’s Richard Green holed out for an ace at the par three sixth hole is in third place after a round of 66 for a nine under par total.