Australia’s Adam Scott will head into the third round of the 2013 World Cup of Golf staring at trailing Thomas Bjorn by nine shots with two rounds to play.

The reigning Masters champion seems to be running on the smell of an oily rag after back-to-back victories this past fortnight on the Australasian Tour. 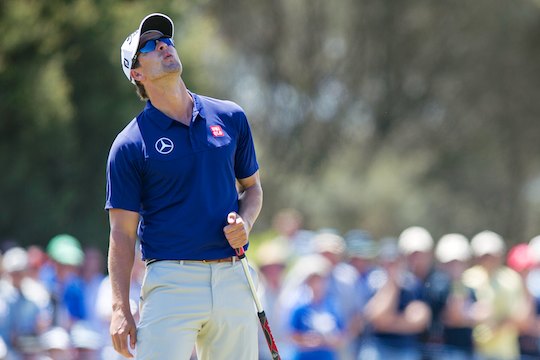 Adam Scott reacts to missing his putt on the 6th during the second round of the World Cup at Royal Melbourne (Credit: Anthony Powter)

After a shock opening round of 75 Scott came out on day two to birdie his first two holes and then picked up three other birdies but again sticking out like a dog’s hind leg, as was the case with his ’9′ at the 12th hole on Thursday, wa a double bogey at the 11th.

It gave the Queenslander a round of 68 to be lying in a share of 21st place on one over par.

“I needed to have a decent score today and it was hard out there. I do not think there were too many great scores to be had because Royal Melbourne is playing tricky so it felt like a hard working 68,” said Scott.

“The conditions were pretty similar than the last couple of days. The greens have their firmness back into them now so it makes you think about all your shots in.”

“You have got to allow for the big bounce and make striking the ball cleanly important into the greens and that is the beauty of Royal Melbourne and that is its defence.”

And while the current World No. 2 attempts to make up ground on the leaders Scott again attracted the biggest following around Royal Melbourne.

“The crowd support keeps you motivated particularly at this time of the year, you know it is getting towards the end of the year and I have played a fair bit of golf over the past couple of weeks and to see the guys out there is definitely a help because if people are coming out to watch me play I want to try and impress them with some good golf.”

And with Australian team mate Jason Day moving into a share of third place it has boosted the home team’s chance of pulling off the team prize.

“It would be nice if I could play my way up there to the top few individually tomorrow and tee off around Jason as well and one goes with the other I guess, we both just have to play well over the weekend but the teams competition is well within our reach and six shots between two people can change very quickly so I think we are looking in good shape for a good weekend,” said Scott.

Thomas Bjorn leads the individual leaderboard on 8-under, one stroke ahead of Team USA’s Kevin Streelman.

Kevin Streelman and Matt Kuchar head the teams leaderboard at 10-under and three shots clear of Denmark and seven ahead of Adam Scott and Jason Day.