Scott one behind surprise leader at Open

Adam Scott is yet to achieve one of his goals of claiming a major title but the world number 13 has put himself in a perfect position to win the Open Championship and secure that elusive major title.

Following opening rounds of 64-67 at Royal Lytham, the Australian was just one shot behind the surprise leader, American Brandt Snedeker, and three shots clear of a lurking Tiger Woods. 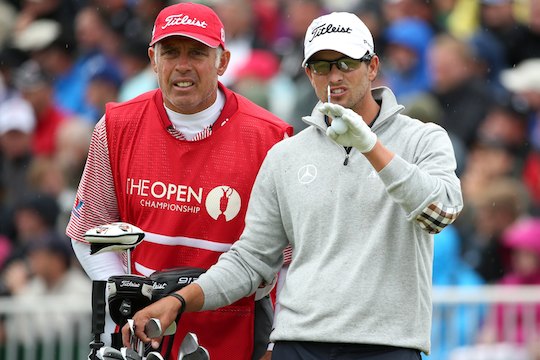 “I’m very pleased with the round today,” said Scott who went out in even par to then card three birdies on Lytham’s challenging back nine.

“Again, a bit of a slow start, but built my momentum from seven onwards and played fairly well from there.”

I didn’t take on any unnecessary risks and kept the ball in play pretty well. So kind of stress‑free, but certainly felt good out there today and something to build on for the weekend.”

Scott considers his move at this year’s Open Championship the culmination of years of hard work and planning.

At the start of last year, he cut back his playing schedule so he could devote more time to preparing for the majors. That and the move to the belly putter appears to be paying dividends for Scott, who in the last two years has been our best performer in the majors.

“It’s purely about having a little more focus on the major tournaments and I feel I play better when I practise more,” he says.

“And I think it’s been effective so far. My putting with the short putter was so hot and cold, and before I switched it was more often cold than hot.”

“I feel I putt much more consistent with it, which has a really positive effect on the rest of my game.”

Snedeker, the winner of three US PGA Tour events, showed a peerless display of precision golf during his second bogey free round 64.

Tiger Woods continues to threaten and when the huge roar that erupted as Woods holed out from a bunker beside the 18th green to make a birdie with Wood punching the air in his trade mark way, the place was buzzing.

It was the type of signature shot that has highlighted many of Woods’ 14 major victories – which include three Open Championships – and perhaps the best indication yet that he’s ready to break his winless major drought since claiming the 2008 US Open.

“Yeah, well, I’m right there in the mix,” said Woods, who in the process of keeping the driver in the bag, made two birdies in his last three holes on his way to a consecutive rounds of 67.

“And with the weather that’s forecast on Sunday (blustery winds), it’s going to be a good weekend.”

Lurking behind Woods is a bunch of talented and experienced performers, including Graeme McDowell, Paul Lawrie, Matt Kuchar and Jason Duffner – all at four under-par.

With a field so tightly bunched, the weekend is set at The Open Championship for another stellar major.

Who will feel the pressure first, will there be another first time winner of a major in Scott or Snedeker, or will Tiger return to the winner’s podium and put to bed the critics that have questioned his capacity to claim another major?

These are all questions that will be answered over the weekend.

One of the biggest surprises in this championship was Phil Mickelson. He shot a couple of low rounds last week at the Scottish Open to suggest he has turned his game around, but today he missed the cut by 8 strokes – just his third missed cut in a major since 2000.

Six of the 13 Australians in the field made the cut that fell at three over.