Adam Scott showed his enormous fondness for European Tour’s flagship BMW PGA Championship in muscling his way to third place on day one at Wentworth.

It had been 15-years since Scott teed it up in leafy Surrey and he found the famed ‘Burma Road’ course again to his liking with eight birdies in a seven-under par round. 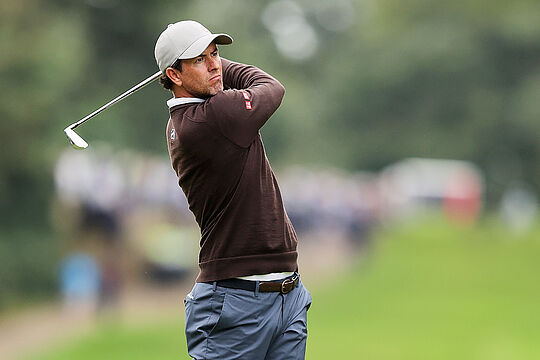 If left the champion Australian just a shot behind the leading duo of Thailand’s Kiradech Aphribarnrat and South African Christian Bezuidenhout who posted eight-under par 64s.

Aphribarnrat capped his round near lunch with five birdies in succession from the 10th hole while Bezuidenhout highlighted his round with a fourth hole eagle and then three birdies in a row and ended his day also with a hat-trick of birdies, including holing a curling birdie putt on the 18th.

Scott highlighted his round with a sensational sixth birdie at the par-4, 15th however it was not as simple as it may sound. Scott’s tee shot had found the trees and fearing it may have crossed the ‘OOB’ line, he played a provisional that looked more ‘OOB’ than the first.

Scott eventually found his original ball and then chipped a second just short of the green. He then delighted the crowd with his third shot when his ball took a couple of bounces and headed straight to the bottom of the cup.

“I definitely thought the first ball was out-of-bounds but it must have clouded around in the trees and dropped down,” he said.

“The second ball actually might not have been any better off the tee but we found the first one and punched it up there. That was a good shot, hit it 50 yards and flicked it straight at the hole.”

“Some days it’s your day out there, and it kind of felt like that a bit for me today. It was nice to make the most of it and shoot a good number.”

Scott gave the shot back at the next before finishing birdie, birdie

“There was a lot of really good, solid stuff”, he said after his round.

“Generally, it was fairways and greens. There wasn’t too much squirrely stuff, although a couple wedges coming in, could have been better. Then on 15, I got out of jail and made an incredible three so it is nice to get a break and take advantage of it.”

Scott has long-time coach, Brad Malone on the bag this week with the duo clearly having a good time as they worked their way around the West Course.

“It worked good today, so we’ll see how the next three days go”, said Scott about having Malone on the bag.

“But he’s caddied for me once before, and he likes getting in there and having a look and seeing what’s going on every once in a while on the course. It’s not been the easiest year on the course for me. I’ve struggled to get momentum going, unlike today. Maybe the driver is the answer today.”

Scott’s three fellow Australians struggled with Wade Ormsby posting a 73, Min Woo Lee, in his BMW PGA debut, carding a 76 while Scott Hend signed for a 76.