Scott was at ease with himself as he chatted to his team and his good mate Els, the player that snatched the Claret Jug from Scott’s hands at Royal Lytham. 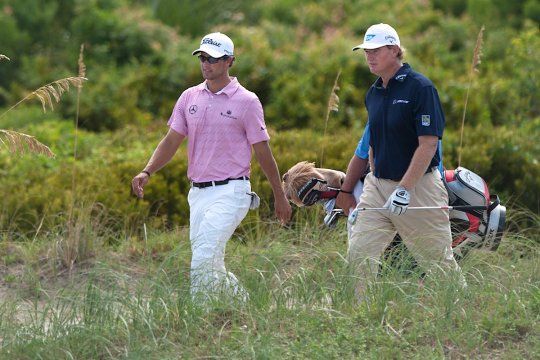 The two are close friends and that was evident during today’s practice round.

The loss at Royal Lytham seemed all but a distant memory, yet questions continue to be raised during Scott’s recent media conferences as to how he played the closing four holes and how he will respond if in the same position in a major.

Scott has embraced the positives from the week at The Open, along with his four other top-15 finishes in his past seven major championships as he looks to end a six-year Australian major drought.

“Unfortunately I didn’t get a win, says Scott.

“But even with the last four holes, taking it as a whole, I played spectacular golf for such a long period of time in a major championship.”

“That’s something I have been working to do for my whole career and finally that’s happened.”

Scott points out the numerous comebacks by players after a setback, including Rory McIlroy, who fell from grace at the 2011 Masters, only to bounce back to win the following US Open.

“There is nothing to stop me from bouncing right back,” Scott says.

“I think probably it took last week, getting back out and playing to kind of shake it off fully. I was ready to play last week, and didn’t play that well and lost my rhythm slightly throughout the week with my swing.”

“But I think now, you know, I’ve got one out of the system after The Open, and it is certainly great to have another crack at a major so soon after.”

Winning on the PGA Tour has always been difficult but winning a major takes it to another level. It seems even tougher for those who carry the lead into the final round, particularly in the majors.

Through 34 PGA Tour events, the third-round leader has gone on to win just 11 times.

It seems the bigger the tournament, the greater the chance of the 54-hole leader faltering. Which also opens the door for someone to charge from behind – six winners this year started the final round at least six shots back.

With the deepest field in golf, the 156-man field at Kiawah includes the top 103 golfers in the world, including 10 Australians.

Scott continues to look at the positives despite the lingering questions and how he would cope should he be holding the lead come Sunday at Kiawah.

“I don’t think I’d be worried about it,” says Scott.

“You know, if I was in that position again, I’d feel like I’m playing pretty good. So at that point, I’d be quite confident.”

“It is certainly not something you’d like to make a habit of and I never have; I have generally been a good closer of golf tournaments in my career.”