Scott reckons you could lose a caddy at Erin Hills

(Memphis, TN:) Adam Scott smiled in suggesting the rough is that tall and thick at Erin Hills that a player could easily lose his caddy during this weeks US Open.

Scott will jet into Milwaukee Monday morning US time after sharing 10th place at the FedEx St. Jude Classic in Memphis. 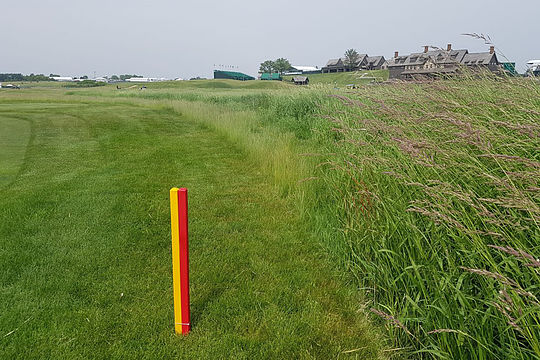 Looking back to the 1st tee and clubhouse with the very tall rough on the side of the fairway (Credit: Bernie McGuire)

The Queenslander burst into contention on day two and on the 20th anniversary of Greg Norman’s triumph in the city home to the birth of Rock and Roll.

However, Scott faded from centre stage after a third day 71 before a final round 68 left him just four shots behind successful defending champion, Daniel Berger.

Scott had travelled north earlier in the week to rural Wisconsin for a practice round at Erin Hills located some 40-minute drive north west from Milwaukee.

Wisconsin licence plates carry the catch line “America’s Dairyland” and to get to Erin Hills you pass by mile after mile of dairy farms and corn fields.

But Erin Hills is a massive expanse, a huge piece of real estate where you could easily squeeze in two to three Royal Sydney’s.

It is also open and exposed and there is really nowhere to hide if the wind gets up.

After having got the jump on many of his Erin Hills rivals Scott says there could be even more pressure on USGA CEO, Mike Davis and his team to get the set-up spot on twelve months on from the media storm of last year’s tournament.

“The USGA is going to be very attentive to the wind and will need to be cautious and conservative on forecasts as we definitely do not want to be caught out,” he said.

“So, the USGA just cannot let anything course set-up wise get away from them.”

“The rough is just so tall and so thick you could lose a caddy, and caddies will not be the only things lost in the rough this week,” joked Scott.

Scott also stressed the USGA is under enormous pressure to get it right rules-wise.

The USGA was in damage control mode twelve months ago before eventual champion Dustin Johnson delivered the USGA, as organisers of the US Open, a huge favour in winning initially by four strokes but then later being penalised one stroke when he was deemed to have caused his ball to move at address early on during his last round.

It was not until December the resultant controversy forced the USGA and R&A to introduce a new rule clearing a golfer of any breach if he or she accidentally moves a ball or marker when on the putting green.

However, controversy seems to have to dogged the USGA in recent years such as in 2015 when Spieth labelled the 18th at Chambers Bay as ‘the dumbest hole I have ever played in my life’.

Scott will be entering his 15th consecutive US Open since making his debut in 2002 at Bethpage Park with his best result coming two years ago at Chambers Bay with a 4th place.

“We have to get back to the rules being either black or white and end up with less grey areas”, said Scot,

“That means getting right away from leaving the game open to so many interpretations to those other sports who may be looking at us.”

“So, this is why the USGA is again going to be under a microscope this week”.