Adam Scott brilliantly ignited hopes of banking a second Barclays Championship victory in four years after muscling his way to within two shots of the lead on day three of the event at Bethpage Park on New York’s Long Island.

Scott was out just prior to 11am local time starting sensationally by holing his approach shot, a lob-wedge from just 89-yards out, for an eagle ’2′ at the first hole and then grabbing five birdies in a sizzling six-under par 65 to take the clubhouse lead on eight under par. 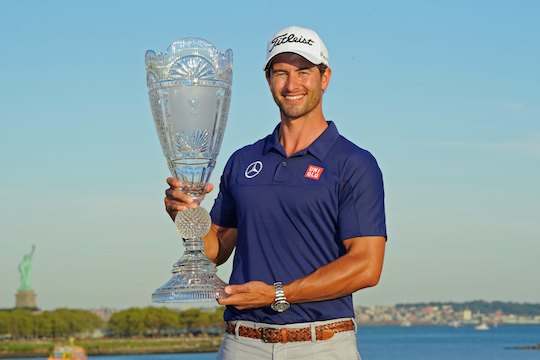 And it wasn’t till just prior to 6pm local time that American Rickie Fowler birdied his last hole in a score of 68 to officially secure the third round lead of the $US 8.5m event at nine under par.

And the former World No. 1s effort, and also going back to using a long-handled putter, brought to mind hopes that Scott can capture the opening event of the 2016 FedEx Cup Play-Off Series for a second occasion since first winning in 2013 and as the then Masters champion.

If so, it would keep the gleaming trophy in Australian-born hands for a second year running after fellow Queensland-born Jason Day won the event last year at Plainfield in New Jersey.

Also victory would ensure a fourth Australian triumph after Bruce Crampton won the 1970 then Westchester Classic and Wayne Grady secured the 1989 championship.

It was yet another hot and humid day on New York’s Long Island and with Scott clearly warming to the occasion.

“Yeah, it feels good. I feel like it’s been a while since I’ve really been in the mix.,” he said.

“I’m always finding myself five or six back from getting momentum. But a few putts went in today, that fixes that, and hopefully I’m in with a shout tomorrow”.

Of course, Scott is a two-time winner this season on the PGA Tour having tasted victory in the back-to-back Honda Classic and WGC – Cadillac Championship events earlier this year on the ‘Florida Swing’.

And in returning to Bethpage Park for a first time since finishing well down in 62nd place in the 2012 Barclays, the Bahamas-based Aussie is excited

“The course this year really does suit my game, and that’s why the first couple days was a little frustrating,”he said.

“Interestingly, I didn’t drive it as good today. I was in the rough a lot more but got a bit lucky with some good lies and managed to get up on the green. If I can kind of put it all together, maybe there’s a good score like this; I’ll probably need that to get up there tomorrow.

“It is a funny game, because I thought I played some really good stuff the first two days. Obviously didn’t get much reward, not making any putts at all.”

“Today, although I still felt I played good, I just missed a few fairways, got some good lies. Managed to get them on the green and then dropped a couple bombs. Once a few go in, it changes everything, and certainly feels good.”

“Hopefully I can keep the mind clear and free and the putts rolling tomorrow.”