(Boston, MA:) Adam Scott is unexpectedly returning home to be with his family in Australia after missing the cut by one stroke in the Dell Technologies Championship in Boston.

Needing to par his last hole, Scott was some 25-metres short of the green in three but then took three shots, including missing his par from two metres, in a bogey ‘6’ for a four-over par 75 and a four-over par tally. 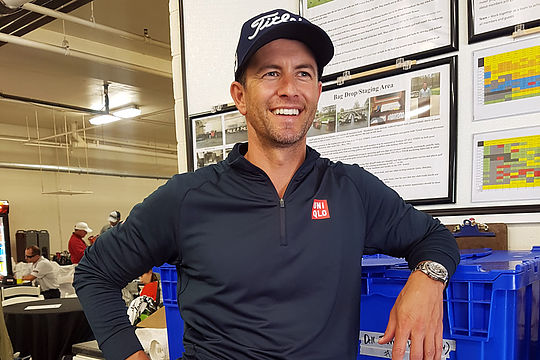 It meant missing the closing two rounds of the $8.75m event for the first time since winning the 2003 Deutsche Bank Championship here – the first of 13 PGA Tour victories.

Scott teed-up on Friday in 73rd place on the FedEx Cup standings and was projected to drop to 83rd.

If so, it will be his poorest PGA Tour season since he was ranked 94th two years ago.

However, his second round was a sour cocktail of three birdies but also five bogeys and a 10th hole double where he sent his drive way right into the trees and could do nothing with his second but chip out.

“I just didn’t play well and I hit a couple of errant tee shots and that cost me dearly,” he said.

“I also couldn’t get it close to the hole and found myself scrambling a lot out there.”

“It was disappointing but it was worth coming back here to the States and having a crack at this week rather than remaining back home in Australia.”

“So, I will head back home and enjoy being with the family but then I have to get my game in some kind of shape before the Presidents Cup.”

“I have a good four weeks now before coming back here for the Presidents Cup so that is more than ample time to work on my game.”

A check of Scott’s stats over the two days showed he hit just 13 of the 18 TPC Boston fairways and 26 of 36 greens in regulation.

And once on the greens, Scott recorded 33 putts on day one and 32 on day two.

“I went with a new putting routine this week and it was good except for a couple of holes where I got a little inside my hip…but then in saying that there was a lot of good stuff, as well,” he said.

“So apart from today that was a mixed bag, I’m confident in coming back for the Presidents Cup my game will be sharper.”

Also missing the cut was fellow Queenslander Cameron Smith with scores of 76 and 73 but unlike Scott, Smith will contest next fortnight’s BMW Championship in Chicago as he is projected to drop 12 spots to 56th on the FedExCup standings and remain inside the top-70.