No champion has studied the names on the Stonehaven Trophy quite like Adam Scott did when he was handed the gleaming Australian Open trophy by Greg Norman last year.

Scott appeared mesmerised as his eyes ran down the list of former Australian Open winners. 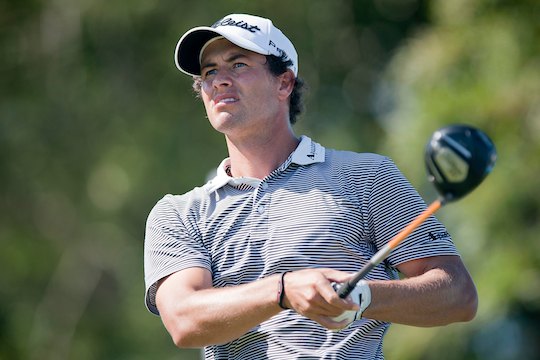 Scott actually led by seven shots at one stage on the final day before posting a 72 on a windswept New South Wales course to win by an impressive five shots, finishing at 15-under-par.

That was Scott’s first pro victory on home soil and his first since capturing the Byron Nelson Classic in May last year.

But it had not been all plain sailing for the softly-spoken Scott.

He entered last year’s Australian Open having attracted enormous criticism since slipping from fourth to 54th in the world.

Also his then relationship with former World No. 1 tennis ace, Ana Ivanovic was very much under the microscope.

But Scott silenced those critics with a run of events leading up to the tournament with results that included a third in Singapore, sixth in the Australian Masters, seventh in the European Tour-ending Dubai World Championship before his victory in Sydney.

Now Scott heads into the defence of his Australian Open title having captured a third Barclays Singapore Open title in five years that moved him back to 20th in the world rankings.

“I had tried for so many years as a junior to try and qualify and it certainly has a pretty special meaning to me now being Australian to have now won my own national Open.

“I had tried to make myself available over the past few years to play in the tournament and to win, and to see how excited everyone was, and to know how proud I was, is something that will always stay with me.

“I remember just admiring the names of the trophy because to me it felt like I had won a major championship as there is some very illustrious names engraved on the trophy.”

Scott recalls how well he was hitting the ball for all four days of his Australian Open win.

“I just felt in control of my game and when you are hitting the ball well, as I was, it lifts your confidence,” he said.

“New South Wales is a kind of course where you need to manage your game well but I was feeling good following some really good results.

“I had struggled all year but then began hitting the ball really well, so I was pretty upbeat going to New South Wales, and that’s always a nice way to feel wanting to get out there and play.

“After such a frustrating year I could see some light at the end of the tunnel so I recall my attitude was good, and besides, I was on that ‘lucky’ side of the draw that wasn’t severely affected by the weather.

“The last day was certainly trying as it was really blowing hard about the middle of the round, and that made it that much more rewarding to come out in front, so I was very proud of myself to finally seal the deal.”

To be handed the trophy by Norman, his boyhood idol, was also something special for Scott.

“That was the really nice icing on the cake to have Greg present the trophy,” said Scott.

“We’ve developed a really close relationship over the years and he’s always been an incredible supporter of mine.

“Greg had gone out on a big limb earlier to pick me for the Presidents Cup and in some way by winning the Australian Open, it justified that. Being picked for the International Team gave me a kick in the pants I needed to get going again.

“I had been digging a bigger and bigger hole for myself at the time and for Greg to be there at the New South Wales and hand me the trophy, after he had long been a hero of mine, was something very special.

Scott now heads to the Lakes Golf Club also with fond memories of Norman having shot an eye-catching 63 on day two of the Greg Norman hosted Holden International.

“Aaron [Baddeley] and I played a practice round with Greg and then to come out and shoot a 63 in the tournament was something else,” said Scott.

“That was my first experience of The Lakes but then I hear it’s changed a lot since then.

“It’s going to be interesting to see how the course is and I am really looking forward to it, as I always find the Australian Open an enjoyable week.

“And now that I have got that monkey off my back of not having won in Australia, it’s going to some much nicer to have the challenge of being the defending champion.