Scott revved up for Masters defence

Adam Scott might be known for his modesty, but he even admits by the time he returns to Augusta National in April he will have tried on the coveted Green Jacket at least 365 times since he won the US Masters last April.

The Queenslander says he has been slightly overwhelmed with the amazing response from not just Australia, but everywhere he has gone since that stunning win over Angel Cabrera in a sudden-death playoff at the 2013 Masters. 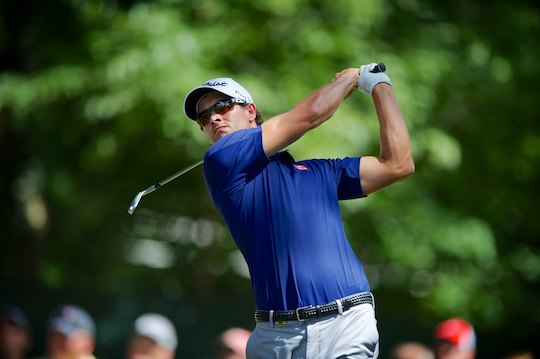 Now Scott feels he knows what to do to bring about another major victory and he’s relishing the chance to successfully defend his title at Augusta on the second Sunday in April.

“I think I’ve got a pretty good recipe at the moment and I’m trying to always improve, but I’ve got a pretty solid base,” Scott explained at a pre-US Masters press conference last week to check on how the defence of his title was progressing.

“I think after the frustration at the end of 2010 (he was winless for almost two years), the frustration levels of again, not really achieving what I wanted in the big events made me sit down and rethink everything about how I go about golf and life and everything.

“I made a lot of changes, not all at once, but made some big changes and changed the way I prepared and scheduled and started doing things to suit me.

“I did what I felt was right and less about what other people thought was right, and you know, it’s kind of accumulated into me performing better.”

Scott signalled his arrival as a world-class player when he won The Players Championship, widely regarded as the fifth major in 2004.

After that the man regarded as having the best swing in world golf struggled to take that next step – to a major championship win.

“It’s interesting, because I felt that was a huge opportunity for me to take the next step,” he said.

“But I just don’t think I knew what it took to do that, and the level of commitment and the work ethic and everything required. “I think back then, I certainly just

“It was kind of the luck of the draw whether that showed up, and it never did.

“It did at The Players that week, but it didn’t at the other ones. “Now I think that I kind of understand that I can control that a little bit more and make it show up for those weeks, or at least make a good level of a good standard of golf shot for those weeks, consistently.”

“While I think the talent was there, the right preparation and structure might not have been for me at that time…to take that next step beyond The Players and go and be a consistent performer in the majors at a young age.”

He sure has now – and Scott is planning a few rounds at Augusta so that he will be ready – and more importantly, so will his golf game, when he steps onto the first tee as Masters champion and attempts to retain his title.