Scott still has a score to settle at the Open

Adam Scott says he still has a score to settle with the Open despite making brilliant amends in becoming the first Australian to win the Masters.

Scott arrived at Muirfield late on Thursday last week and played a first full practice round on Friday using John ‘Ronnie’ Roberts and the caddy to Brett Rumford, and winner earlier this year of the back-to-back Ballantine’s Championship and Volvo China Open. 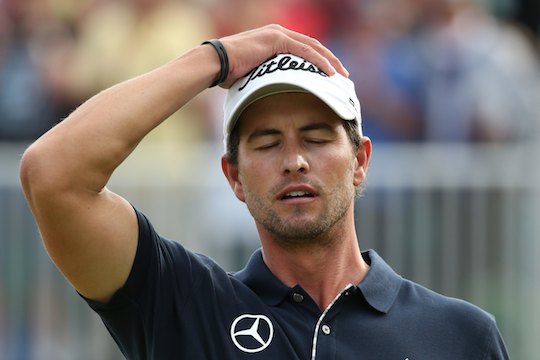 Adam Scott still has a score to settle at the Open (Credit: Getty Images)

It’s the second occasion in three years Scott has drawn on Roberts as the Bournemouth-born bagman helped out Scott at Royal St. George’s two years ago and also ahead of the arrival of Scott’s regular caddy, Steve Williams who arrived Sunday at Muirfield to take over the duties of Scott’s full-time caddy.

“Adam was delighted with the set-up of the course and remarked how fair it is,” said Ronnie.

“He played nine holes in the morning then had some lunch and we did the back nine after lunch. Adam had his coach, Brad Malone with him and played with Tim Clark.”

“But it was just great for me to be to able to help out the current Masters champion and offer him with another set of eyes ahead of the championship as I did for Adam two years ago, and also on Friday at Royal St. George’s before Steve arrived.”

Scott is competing in his 14th Open Championship since making his debut in 2000.

Last year at Royal Lytham and St. Annes was the closest Scott came to a first Major Championship win leading by four heading to the final round but then self-destructing to bogey his closing four holes and ‘gift’ a second claret jug to good friend, Ernie Els.

“I haven’t won the Open just because of the Masters, and I still miss out on that,” he said.

“I got into Muirfield late afternoon on Thursday and it’s the first time I’ve been back there since 2002 so I am really looking forward to the week and trying to get myself in a similar kind of situation, and a chance to win the Open.

“The hardest thing about next week is going to be the expectations. But, I believe it, I will trying to redeem myself for Lytham.”

Like Rory McIlroy a year earlier, Scott made amends just two majors later in becoming the first-ever Australian in the 77-year history of the Masters to be fitted with an Augusta National green jacket.

After his Lytham meltdown Scott kept a very low profile high up in the Swiss Alps and his chalet apartment overlooking the Crans-sur-Sierre course and venue each year of the Omega European Masters.

There was not breaking down doors or kicking any cat. In fact, Scott even found his way to the practice range at Crans to work on his game ahead of his defence of the WGC – Bridgestone Invitational.

“It’s more apparent to me now, as it’s a year on, that you were all surprised that I wasn’t shattered after Lytham and if I’d watched someone else do what I did, it would have been devastating but honestly that’s not how I felt,” said Scott.

“When I changed my plan with regards to preparing to play well in the majors, I took the result out of the equation; it was more about the process.

“So, essentially at the Open, I had achieved my goal; in my head I had won already won. The result really wasn’t the judge of whether I had succeeded or failed.”

Scott is among 11 Australians who will be teeing up at Muirfield including Australia’s previous Major before Scott in Geoff Ogilvy who captured the 2006 US Open.