Western Australian Scott Strange couldn’t have picked a better week to record his best result of the year, securing a place in one of the career ‘highlight reel’ events – an Open Championship at St Andrews – with a runner-up finish at the Japan Golf Tour’s ‘Gateway to the Open’ Mizuno Open.

38-year old Strange was the joint leader with a round to play and shot a final round one-under par 71 to finish second to Japanese veteran Taichi Teshima, who shot four rounds in the 60s for a 15-under par total and a two-stroke victory. 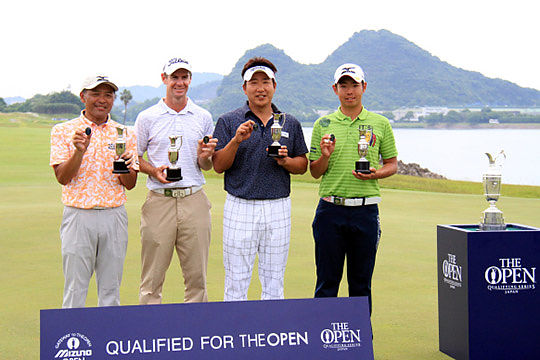 This was Teshima’s 8th Japan Tour win and his first since the Japan PGA Championship last year.

The leading four players inside the Top 12 who were not already qualified for The Open earned a tee time at St Andrews via this week’s event.

Courtesy of their good form this week, Teshima, Strange and the Japanese pair of Tadahiro Takayama and Shinji Tomimura will now be making plans to appear at the hallowed Home of Golf this July.

Strange will make his second Open Championship appearance in July and his qualification builds on an already impressive list of ten Australians who were already exempt for The Open.

“I have played the Old Course a few times at the Dunhill Links but never The Open. Last time in 2008, I played under the duress of my sister passing away so I don’t really recall too much.” Strange said.

”For this trip though, I’ve already had my mate over there texting me all week saying ‘you have got to get into The Open because I’m on your bag,’ so I’m really looking forward to it.”

Australians Won Joon Lee (-9) and Brendan Jones (-7) were close to joining Strange at St Andrews but despite just falling short, will nonetheless be more than satisfied with top-ten finishes.